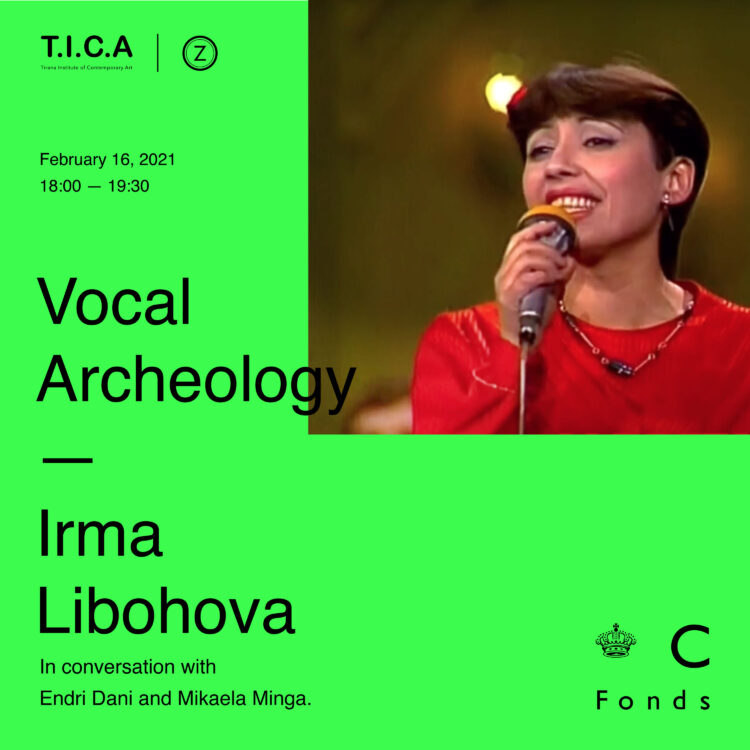 VOCAL ARCHEOLOGY is a part of T.I.C.A. – SITUATED A.I.R. PROGRAM, organised by ZETA and supported by PCF RELIEF FUND

Endri Dani has spent his time at the T.I.C.A. Situated Residency program by digging deeper into and intensifying his dialogical relationship with the well-known Albanian singer Irma Libohova. He considers this to be an attempt at de-contextualizing the “modern iconography” as a product of mass media. The artist and the signer have spent time together by doing mundane things: talking walks, sitting in cafes, home visits, etc. At a later stage, musicologist Mikaela Minga joined Libohova and Dani, and altogether they plan to organize a public talk focusing on the singer’s rich life experience.

The talk takes a historical look into relations between (totalitarian) state, society and individual through the difficult relation between discourses of freedom and discipline – all from the perspective of the role of voice in music and in society.

The voice did not figure as a major philosophical topic until the 1960s, when Derrida and Lacan separately proposed it as a central theoretical concern.

The talk will start with childhood memories of Libohova circling around the acoustic system of music making in family settings. Then it we shall move to the actual technological developments and their impact on the sociology of musical events. Various aspects related to the role and use of the voice will be in focus: voice rationalization, voice as a social agreement, voice ethics (in relation to consciousness), the relation between voice and body (self-censorship) or the negotiating causes of the voice.

ENDRI DANI was born in 1987 in Shkodra, Albania. He studied at the University of Arts in Tirana from (2006-2010), and currently lives and works in Tirana. He is co-founder of MIZA Galeri, an artist-run space in Tirana dedicated to emerging artists from the Balkan/Mediterranean region.

His recent work has been deeply oriented towards anthropological research, focusing on the predicaments of local identity in the era of globalization and underlying paradoxes, particularly as they manifest themselves in material and consumer culture.

Dani’s work has been exhibited in the Kochi-Muziris Biennale, India (2016); Bienal del Fin del Mundo, Argentina (2015); Marrakech Biennale 5, Marrakech (2014), as well as in museums such as the The Israel Museum, Jerusalem (2019);Centre Pompidou, Paris (2016); MuCEM, Marseille (2016); Ludwig Museum-Museum of Contemporary Art, Budapest (2016); The Pino Pascali Museum Foundation, Italy (2015) and the National Art Gallery, Tirana, among others.

VOCAL ARCHEOLOGY is a part of T.I.C.A. – AIRLAB PROGRAM, PCF RELIEF FUND, that has issued a fund that will enable the continuation of activities for independent organizations that support artists and sustain art scenes, to counter the very difficult situation in the culture sector, created by the pandemic of the Covid-19 virus.