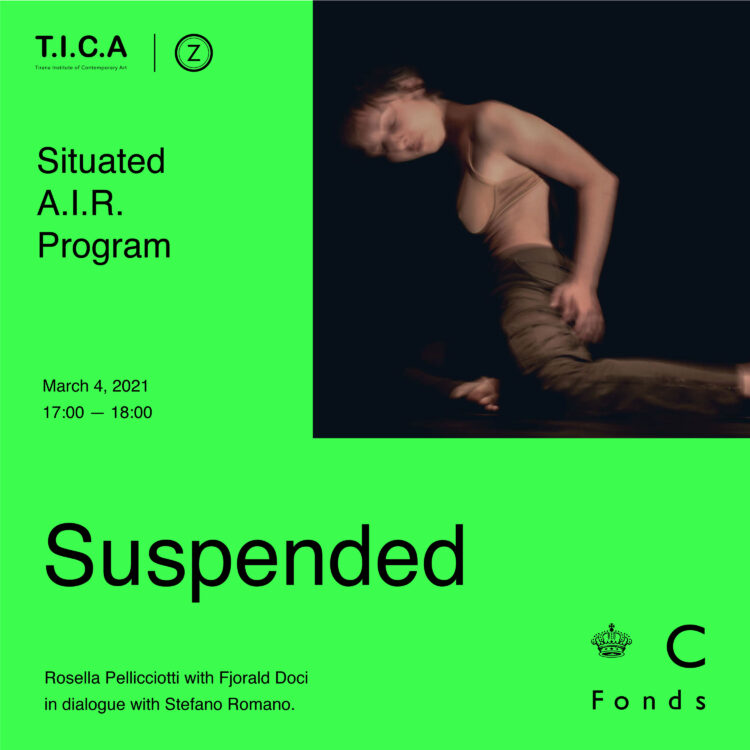 SUSPENDED is a part of T.I.C.A. – SITUATED A.I.R. PROGRAM, organised by ZETA and supported by PCF RELIEF FUND

Rosella Pellicciotti’s work, choreographed together with Fjorald Doci, is a reflection on this idea of waiting that embodies an expectation. The performance has a temporal structure that begins with the expectation of the spectators to be able to enter and see it. In fact, only a limited number of people can enter at a time, and the performance will be repeated 4 times. Furthermore, the action is divided into three moments that bring the performer and the spectator back to the same starting point. As if there had been no journey, as if the time spent together had rolled up on itself bringing everyone back to the initial moment. As if, that expectation of the performance had not produced only a nostalgia for the future. Rosella’s clothing also shifts us into another physical situation. A situation of intimacy that brings us eternally back to the starting position.

Rosella Pellicciotti is a dancer / performer, a young Italian-Albanian choreographer, graduated for Choreography (2016) and Master (2018), at the University of Arts, Tirana.
Active in the Albanian alternative dance scene since 2014, as a member of the Albanian Dance Theater Company, directed by Gjergj Prevazi, with whom she has performed in Albania, Kosovo, Macedonia, Italy, Poland, Austria and China. Since 2017 she has been the creator and co-creator of the choreographic works ‘Vortex’, ‘Winter Flowers’, ‘Earthly’, etc. As a performer, she has collaborated with a number of Albanian and European artists: theater directors, film directors, visual artists, choreographers; among the most recent collaborations is the one with Gregor Luštek, in ‘Tri Sestre’ (Slovenia).

Fjorald Doci is an Albanian dancer / performer and choreographer. After graduating from the National School of Ballet in 2013, he continued his studies in Choreography at the University of Arts, Tirana, where he received his Bachelor’s degree, (2016) and his Master’s degree (2018).
He is a member of the Albanian Dance Theater Company, directed by Gjergj Prevazi, since 2014, performing in Albania and abroad in international festivals. He has collaborated as a performer with (among others) director Dino Mustafić, with Compagnie Linga, in the creation of ‘Between’ (Switzerland), the Italian company ASMED, as well as with the choreographer Gentian Doda, at the National Theater of Opera and Ballet in Tirana.
Doci has worked as a choreographer in the creations ‘Earthly’, ‘Empty’, etc. He is the author of his solo performance ‘Abducted’ (2018).

SUSPENDED |Rosella Pellicciotti & Fjorald Doci in dialogue with Stefano Romano, is a part of T.I.C.A. – AIRLAB PROGRAM, PCF RELIEF FUND, that has issued a fund that will enable the continuation of activities for independent organizations that support artists and sustain art scenes, to counter the very difficult situation in the culture sector, created by the pandemic of the Covid-19 virus.