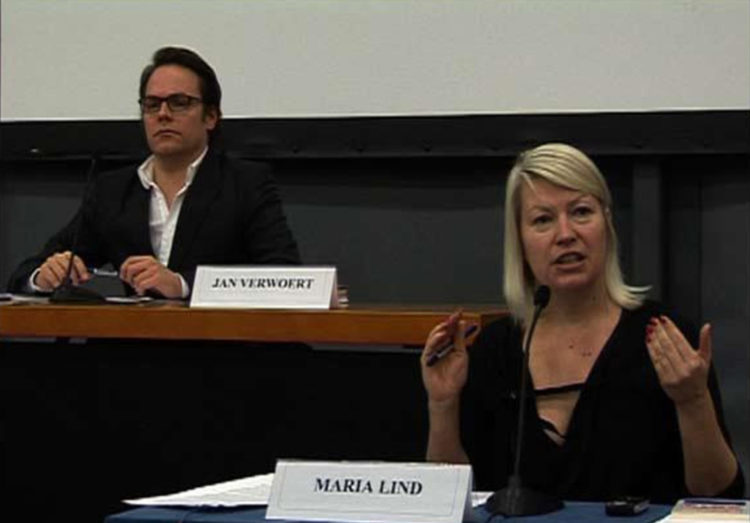 A Crime Against Art

The film is based on the Madrid Trial, by Anton Vidokle and Tirdad Zolghadr

Starring:
Jan Verwoert as the Judge
Anton Vidokle & Tirdad Zolghadr as the Accused
Chus Martinez & Vasif Kortun as the Prosecution
Charles Esche as the Defense
Maria Lind as the Expert
Setareh Shahbazi as the Artist
Anselm Franke as the Witness
Keti Chukhrov as a Member of the Public

A Crime Against Art is a film based on the trial staged at an art fair in Madrid in February 2007. The trial, inspired by the mock trials organized by Andre Breton in the 1920′s and 30′s, playfully raised a number of polemical issues in the world of contemporary art: collusion with the ‘new bourgeoisie’, instrumentalization of art and its institutions, the future possibility of artistic agency and other pertinent topics. The trial begins with the assumption that a crime has been committed, yet its nature and evidence are allusive and no victims have come forward. The testimonies and cross-examinations become an attempt by the Judge (Jan Verwoert),the Persecutors (Chus Martinez and Vasif Kortung),and the Defence Attorney ( Charles Esche) to unravel the nature of the mysterious “crime against art.” Set as a television courtroom drama and filmed by four camera crews, the film presents a condensed two-and-a-half hour version of the trial.

Hila Peleg is a curator and filmmaker living in Berlin, Germany. Peleg has curated solo shows, large-scale group exhibitions and interdisciplinary cultural events, across the visual arts, film and architecture, in public institutions throughout Europe and internationally. She is also known for her documentary film work including her award winning feature film “A Crime Against Art” from 2007 and “Sign Space” from 2016. Peleg’s films – are observation-based documentaries that engage with the conventions and debates that inform the institutional space of art.

Hila Peleg has curated numerous interdisciplinary projects and exhibitions for institutions such as KW Institute for Contemporary Art (Berlin), Iniva – Institute of International Visual Arts (London), Haus der Kulturen der Welt (Berlin), and Centre Pompidou (Paris). In 2010 she founded the Berlin Documentary Forum, a biennial event initiated at Haus der Kulturen der Welt, devoted to the production and presentation of contemporary and historical documentary practices in an interdisciplinarycontext. She was the artistic director of the Berlin Documentary Forum until 2014. Peleg was co-curator of Manifesta 7 (Trentino-Alto Adige/Südtirol, 2008) and curator of the film program at the10th Shanghai Biennale (2014). Recently she was a curator of Documenta 14 (Athens and Kassel, 2017), with a focus on the film programs and the large-scale moving image installations in both Athens and Kassel. She also conceived Documenta’s year-long weekly film program KEIMENA that was running on Greece’s public television channel ERT.

Peleg is the co-editor of the book “Documentary Across Disciplines”, The MIT Press, Cambridge, MA and London, HKW, Berlin, 2016.

This screening has been possible by the courtesy of Hila Peleg and Bureau des Videos.