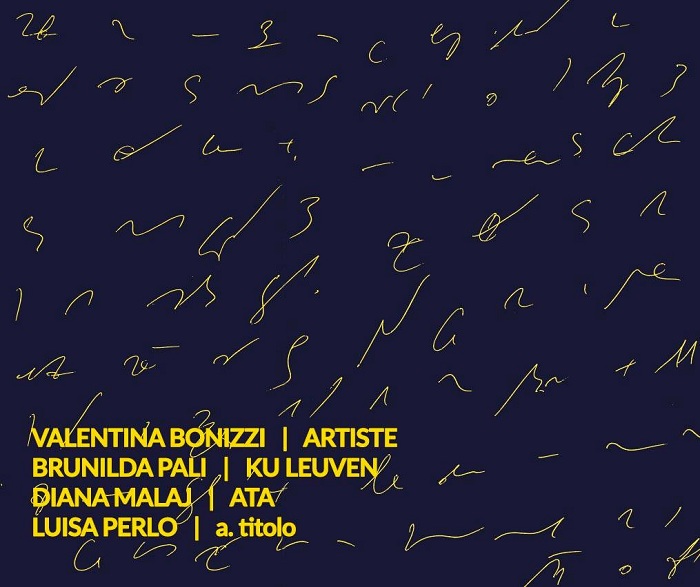 In the occasion of Valentina Bonizzi’s exhibition The Transitory State of Possible Stories,

Zeta Gallery is please to invite you to a talk with invited guests:

The three of them have written about the work of Bonizzi from a narrative, curatorial and collaborative point of view. For this event, both the visual works and the writings will be unraveled through a performative conversation.

Brunilda Pali is a postdoctoral researcher at the Leuven Institute of Criminology. Brunilda has studied Psychology at the University of Bosphorus, Gender Studies in the Central European University, Cultural Studies in Bilgi University and Criminology in KU Leuven. Her areas of interest are feminism, critical social theory, social and restorative justice, and arts and literature. Brunilda writes on restorative justice in http://www.restorotopias.com and on her other interests in the collective. blog http://www.securitypraxis.eu.​

Diana Malaj is one of the three funders of the activist group ATA which priority is the fights for the use of cultural spaces in their city, the only places where they have a possibility to gather. Diana is a law graduate and an activist focusing on the right of the accessibility to culture in the periphery, with a specific focus on the role of women in art and literature. She is interested in what she calls “the terrain of action and reflection” which defines the human being as a subject of law and right and her/his resistance as a creative act. Through activism with the ATA group, she has been able to explore various disciplines such as anthropology, journalism, art, literature and law, all of which are ways of re-conceiving the dimension of social movements and activism. http://www.nyje.al/

Luisa Perlo is a co-founder of a.titolo, a non-profit organization created in 2001 by the homonymous collective of curators, critics and art historians, founded in Turin in 1997 together with Giorgina Bertolino, Francesca Comisso, Nicoletta Leonardi and Lisa Parola. a.titolo was the first curatorial collective established in Italy and one of the first organizations in the country to work with artistic projects in the public realm according to collaborative, participatory and process based methodologies. a.titolo investigates and promotes the relationship between art, urban and social environment by curating public art and context-specific projects, exhibitions, workshops, residencies, video, performances, experimental and multidisciplinary programs for learning and cultural production.