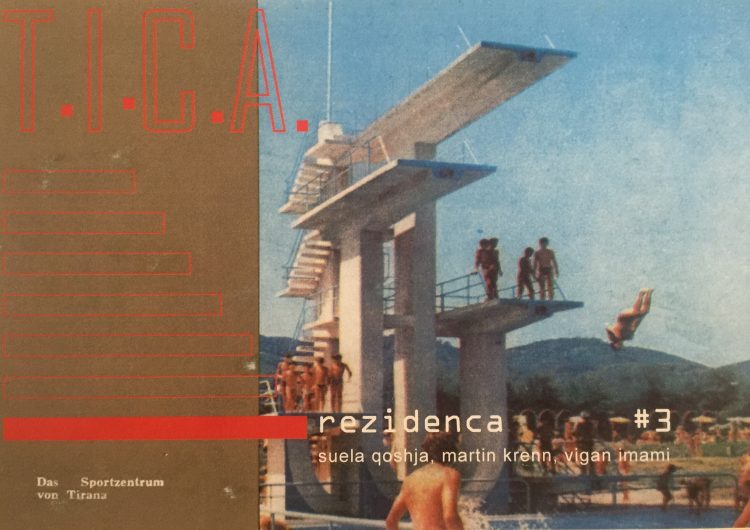 September – October, 2007 period.
Artists: SUELA QOSHJA, MARTIN KRENN, VIGAN NIMANI
Rezidenca #3 is an exhibition with the participating artists of the
TICA A.I.R. program for the September – October, 2007 period.
During this period, the artists stayed and worked for 2 months in
Tirana, realizing a number of new projects, investigating different
aspects of Albanian society and history, as well as human relations
in our global condition.
This residency period was part of an exchange project with Graz,
and was made possible with the support of the European Cultural
Foundation and the Austrian Embassy in Tirana.

Photos from the exhibition 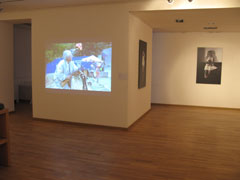 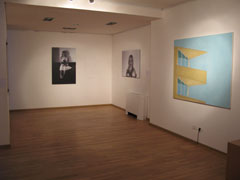 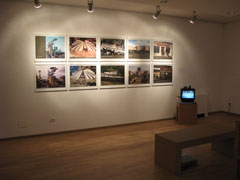 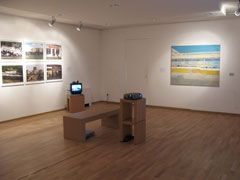 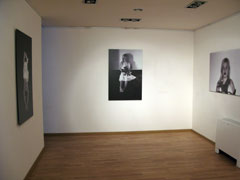 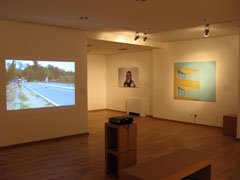 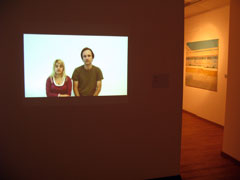 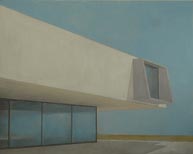 Eyes are wide open and looking at you in the series “Avenue of the Stars” of Suela Qoshja. In all photographs her eyes are opened and staring at you. It’s this kind of looking of a still image that follows you in every corner of the room or every direction you go. But there’s something specific with her look – she’s looking at you as if she’s trying to predict your next move and the way it will affect her. Dedicated to one of Albania’s worst social plagues of the last 10 years – the trafficking of women – and shot a few days after the artist’s neighbors was trafficked in Germany, the series is a re-appropriation and a mixture of classical standards of “beauty” and a continuous condition of discrimination of a social class –women. Between the elegant leaves of flowers she’s holding and the heavy make up of her face, a subtle critique of “innocence” permeates the whole series.

In my work during the residency I have been collaborating with Martin Krenn, an artist from Austria. The question I raise to him in the video are part of typical “over – the – table” discussions, which are taking place during the dinner in Albania. In the work, I have been  interested to research how communication and creation of a dialogue is constructed differently in different societies.

On the second of my residency I asked the national Museum to get a book of Tirane in English. I got one – from under the table. it is kind of Tourist Guide that was published in German/English/French/Albanian in 1990. after the Berlin wall in 1989 Albania was the last country in Europe with a communist system ( until 1992). The book is meant to be a photographic guide were you can visit in Tirane all buildings and attractions of Enver Hoxha and his communist party. It present a perfect communist town.

I decided to re-photograph the places to look how they changed after 17 years. For example the former Enver Hoxha Museum has now a sign with “welcome President Bush” on its top.

In addition to the photo-series i got the possibility to do a video- interview with the photographer of the original book, Petrit Kumi, from whom I could get the additional information about the background of the production of the book.

My project is investigating the mechanism of ideological rhetoric and image on the example of a book, that was made during the last days of a communist totalitarianism regime in Europe. It also shows in a subtle way how neo-liberal capitalism destroyed that nevertheless of the dictatorship functioned socially and economically well.

in a single take, a street scene is documented in which an elderly man, in an unexpected act, becomes the protagonist of the short film. ONE SHOT can be read as a metaphor for the fight ( for survival) of the individual within post-communist society.

Balconies, windows, glasses and sky, all appear in the paintings of the “Untitled” series of Vigan Nimani. painted is a minimalist way, resembling the architecture they depict, the buildings in Nimani’s paintings seem timeless. While one can trace silhouettes of modernist architecture, depicting only fragments of buildings gives them a somewhat utopian, futuristic feeling, while we’re all conscious about the fact that the architectonic reality from which these buildings have been doesn’t contain either.

Stripped of human presence, with numerous reflecting glasses and fragments of sky, the buildings in Vigan’s paintings seem to deepen in mystery, while luring our curiosity to identity and discover them.