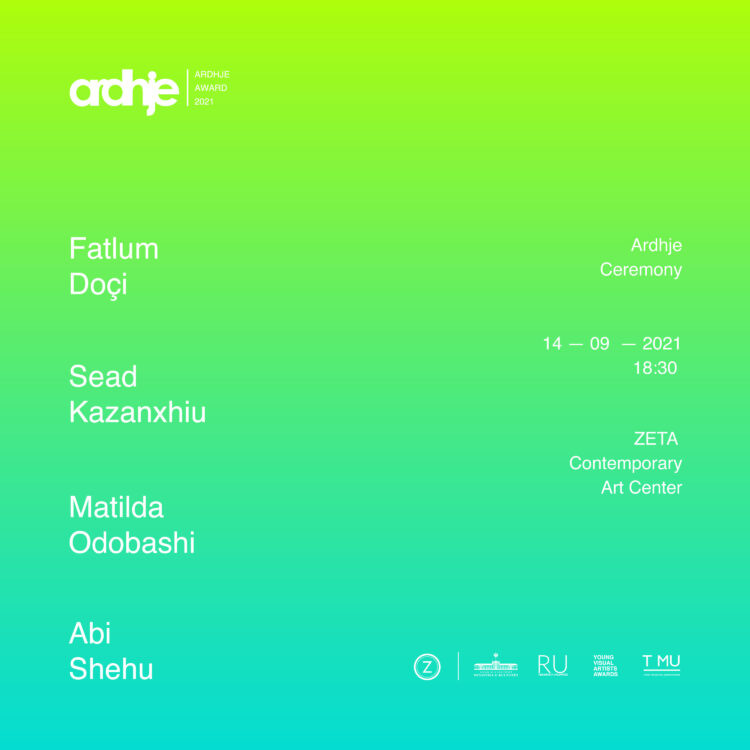 2021 ARDHJE Award Winner will be announced during the opening of the exhibition, on September 14, 2021.

The international jury members are: Lilia Kudelia, curator and art historian, currently works at the Contemporary Museum in Dallas, Texas, USA; Markus Waitschacher, curator, currently part of the research team of the Universalmuseum Joanneum, responsible for modern and contemporary visual art, in Graz, Austria; Olson Lamaj, artist and the winner of the ARDHJE Award 2012, Tirana.

The ARDHJE Award winner will have the opportunity of two months of experience in the residency program, at Residency Unlimited, in New York, http://residencyunlimited.org, and a personal exhibition at the ZETA Center.

The 2021 ARDHJE Award is organized by ZETA, a Center for Contemporary Art in Tirana with the support of: Ministry of Culture, Albania; The Trust for Mutual Understanding – New York;  YVVA – The Young Visual Artists Awards and  Residency Unlimited – New York.

The exhibition of the finalists of the Ardhje Award 2021 will remain open until September 24, 2021.

Fatlum Doҫit’s work ” Flowers and Tears ” is a series of objects or sculptures produced by the artist with materials that are usually produced jewelry or domestic decorative elements. These stylized objects, with almost floral motifs, create a community that stands in the exhibition space as a single work or a kind of composite sculpture. Silver, copper, natural stones, resin, etc., materials used by artisans (the artist himself applies the craft in his daily activity) come to this work, liberated from their conventional function and forms. As they are no longer classified as jewelry, these objects / sculptures raise the question of what exactly they are, and what they adorn? Because beauty remains present in them even as they no longer represent certain objects, such as pendants, bracelets or rings of mass use. Here it remains to admit that the work simply adorns the exhibition space, which is a white cube and thus liberated from time immemorial, from historical architectural ornamentalism. So maybe we are dealing with a jewel of the exhibition space after we have accepted that “ornament is a crime” (according to A. Loos) and we have cleaned from it everything, including our clothes, body, our modern appearance. However, this does not make Doҫi’s work a “secessionist” work. His decorations do not adorn any exposed object, they are the object itself detached from function and placed before us like a part of skin removed from the body it once wore.

Doҫi’s work restores the old debate over art and craft. Not only because the author applies them both in his activity, and knows how to distinguish where they come together and where they divide. Not only because the treatment of this issue is for him an identity search in the context of the city where he lives and works (Shkodra has a well-known tradition of handicrafts and folk aesthetics) but also because history has shown that every artistic attitude that tries to move forward getting rid of the craft as something obsolete pulling it back, has resulted in the production of a new craft when it is formalized and widely accepted.

Matilda Odobashi’s work “False Lines” is a mural that occupy in full a wall area in the gallery space. Made in printed wallpaper it has been realized  after a step by step process. The work starts with small drawings that are mostly sketches from the impression to the artist, left by the city and the urban conditions. However, there is not a landscape but  individual elements that attracts  the attention of the artist and that are constantly part of her interest.

After that, the drawings move on to another process. Then digitalization. They are photographed and processed on the computer being standardized and appearing multiplied and repeated as constituent elements of a composition that is finalized when it takes on the necessary dimensions. The initial drawings are thus transformed somewhat into abstract signs (they retain something from their initial original stage) that are integral elements of a virtual situation that functions as a texture similar to a woven mesh. This texture, which as a logic surprisingly reminds you of the traditional weaving of home textiles (tapestries who wore rich home walls) but at the same time also Minecraft computer games, gives the work  a synthetic character that sums up a complex way of working. There is an immanent tension in the clashes between manual work and its computer processing.

Using interior-design tools, Odobashi does not intend, of course, to make a decorated wall, but to make her work part of the built-up space of the city, the space that her work focuses on and reflects on. It is precisely the city that during the process of weaving disappears into Odobashi’s work. The lines realized by hand at the drawing stage with all retaining of the expressiveness, they are transformed into standard templates  that can be used in infinity, but it is precisely this infinity that makes them untrue. Just like in the game of Minecraft, which is a never end  demolish-built, the work od Odobashi  offer us an illusory situation but at the same time the imaginary one with the infinity of possibilities because the game should continue only for the sake of the playing.

The work of Abi Shehu “Saharaja ”is a video installation consisting of twelve old television sets, stacked on top of each other in three rows, each one displaying on the screen a recurring animation. The animations stem from photographic images of graffiti (drawings, writings, signs) found on the walls of the ruins of the infamous former prison and labor camp, Spaҫ (1968-1990).

In poor physical condition due to lack of preservation, Spaҫ’s graffiti , are brought by the artist, as almost archeological objects documented by photography. They are precious evidence of the history of buildings and the existence of people who suffered inside them. Although the graffiti seems to belong to the last years of the prison (1987-1990) and does not have a confirmed documentation, they manage to convey a kind of existential aura and introduce us to the psyche and imagination of the prisoner inside that prison, known for cruel conditions and extreme brutality. The aesthetics of these graffiti, apart from the historical and anthropological value that the building of the former Spaҫ prison carries, does not stand outside an aesthetics of public graffiti, commonly found in 1980-90, in schools, dormitories, barracks, factories for which Faucault says that correspond to the regime of closed and organized environment (where prison is the most extreme environment) in function  of production. This environment evokes rejection, resistance, avoidance. It is no coincidence that these images are mostly banal television stereotypes and revolve around sex, advertising, sports, foreign cinema, dangerous enemies of discipline and the official ideology of the political regime. Not coincidentally, we see among the graffiti, television sets, as the only windows from which they could be reached by the Albanians of those years. This is the reason why Shehu uses old television sets, objects, not little adored by Albanians, in the years we are talking about. Instead of looking at these screens, foreign channels, seen illegally in Albania in those years, we see their reflection or effect in the minds of imprisoned locals. Meanwhile, the animation or  the animating graffiti, which anyway is a kind of anxious convulsion, reminds us that they are still there, trying to shake us a little and make us turn our gaze toward  them.

Sead Kazanxhiu’s work “Baltosje” is a film made for the “Ardhje ” Award. The camera follows three elderly roma women, accompanied by a little girl, who have left  the house one morning and go to collect soil. The film shows in detail the process of soil collection, the return route and then the processing of the collected material at home. Here, through detailed plans, the viewer sees the transformation of the soil from large pieces into fine powder and after mixing with water and boiling, into a thin viscous mass of dark color. Unexpectedly and always using the detailed plan, the camera focuses on the hands of women who paint with the obtained mud objects of different shapes and sizes until we manage to distinguish the body of the artist himself who undergoes the process of painting or covering with mud. As the plan opens and we see the general view, we notice the objects of a work office, a table with a computer and a chair together with the artist himself in the middle of the room, dressed in the suit and tie of the clerk standing frozen, all painted with mud, including the walls of the room, giving us the appearance of a sculpture like those of the terracotta Chinese “army”, of the third century BC. Kazanxhiu, turned into a clay sculpture along with his office,  is an image to create the funerary feeling that emanates from the character of the tomb sculptures of Emperor Qin Shi Huang. The thin layer of mud that covers everything serves as a dividing line between the two worlds. Which of these two worlds dies and which is alive remains undetermined. The work seeks to unravel the relationship between the Kazanxhiu artist and the official on the board of a government body dealing with the rights of the Roma community, where he has been working for some time. A kind of autobiographical reflection that expresses the complexity between two conflicting relationships with each other. Equally complex is the artist’s choice. If on the one hand mud is a punitive act of defilement that seems like a visualization of a linguistic expression commonly used in political jargon, on the other hand, mud used is what in the Roma tradition, as in all ancient cultures, is used for regenerative therapy, cleansing and healing.

*The ARDHJE Award is an international prize for contemporary visual artists from Albania, initiated by TICA-Tirana Institute of Contemporary Art, in 2005 and joined the regional network YVVA – The Young Visual Artists Awards in Central and South Eastern Europe in 2007.
ARDHJE is an annual competition and award, aimed at promoting creativity, public exposure, and contemporary art in Albania and internationally.

ARDHJE Award, as well as similar prizes in Eastern and Southeastern Europe, is conceived as an open competition addressing young artists of Albanian origin up to 35 years of age to apply and take part in a transparent process, that does not only offer the opportunity to create new works and present them at a group exhibition of selected finalists, but also to support their artistic and professional development. A jury, composed of local and international experts in the field, selects 4 finalists, who are provided with an allocated production budget, the curator and the exhibition venue in Tirana. Jury’s decision about the winner depends on the candidate’s artistic merits and prominence demonstrated by the artistic portfolio and CV; the particular artwork presented at the finalist exhibition; the results of an interview with the international jury; and the potential to benefit from immersing oneself into the New York art scene during a two-month stay at Residency Unlimited.