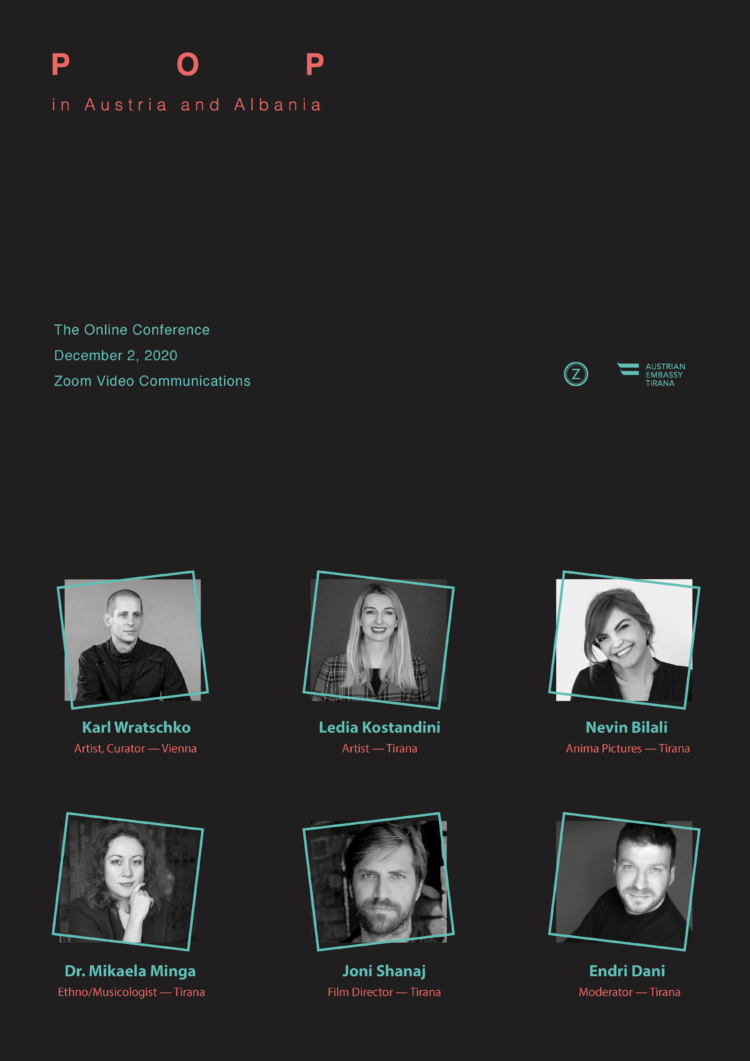 The online discussion “POP in Austria and Albania”, organized by Zeta Center and supported by the Austrian Embassy in Tirane, was held on December 2, via zoom, with the participation of: Karl Wratschko, Ledia Kostandini, Nevin Bilali, Mikaela Minga and Joni Shanaj, moderated by Endri Dani.

Karl Wratschko – About the exhibition “POP 1900-2000”, held at the Graz Historical Museum.

Ledia Kostandini – POPing around the city

Karl Wratschko works as a curator, filmmaker and artist. In his curatorial work he focuses on Silent- and Avantgarde Film and Experimental music. He works as curator at the Il Cinema Ritrovato Festival in Bologna since 2016. Film works: mare liberum | mare clausum (2019), Index (2018), I have seen the future (2017), Pale April (2016), Monte Nero (2014). Installation works: Ich bin viele Gesichter (2018), Informa (2016) (both together with Michael Bachhofer). Current artistic and curatorial projects: film project Präsenz (together with Aleksandra Kolodziejczyk), film project Remade, exhibition POP 1900-2000 at Universalmuseum Joanneum (together with Maria Froihofer and David Reumüller) and Guggenheim in Floridsdorf (art project in public space together with God’s Entertainment).

Mikaela Minga is Dr. in ethno / musicology, which deals with various musical practices of the Balkan and Mediterranean area; with twentieth-century music, as well as with the music connections to cinema and multimedia in general. Her specific focus has been on certain aspects of Balkan and Mediterranean urban cultures; musical phenomena and developments related to the dictatorial and post-dictatorial period in Albania, seen both in the narrow creative artistic framework, as well as in a socio-cultural plane. She is the author of several books and a considerable number of articles and essays published in printed and the online media. Areas of interest: ethno / musicology; studies on folk music and artistic performance; cultural anthropology; music, film and multimedia; critical studies.

Joni Shanaj (Tirana, 1976) is a film director from Albania. He studied film and social anthropology in Sweden and now continues his artistic work as a director and film professor in Tirana, Albania. He is known for his long feature film Pharmakon (2012) which was the Albanian entry for the Best Foreign Language Oscar at the 85th Academy Awards. He also directed the documentary “Ivi Tirana Punk (2000)” which has turned into a cult film to the generations of Albania who are familiar with this genre and ideology.

Anima Pictures is a production company specializing in audio-visual creations. It was founded in 2009 with the aim of creating quality content for its customers. Their experience over the years has shown that it operates qualitatively in the conception and realization of the advertising industry, film, video music, public events, television shows, etc.