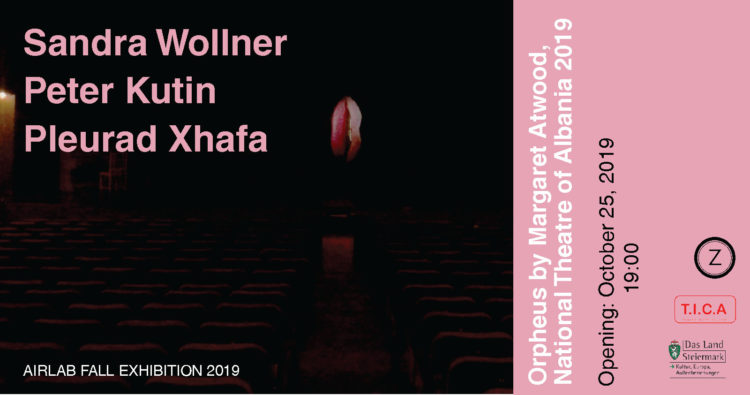 TICA – Tirana Institute of Contemporary Art and Zeta Center for Contemporary Art present the exhibition of the artists in residency program TICA FALL AIRLAB 2019. The participating artists, Peter KUTIN, Pleurad XHAFA and Sandra WOLLNER have developed their artistic research during a two-month long period in Tirana. The exhibition display the results of their respective researches, in which they investigate themes relating to the city.

AIRLAB FALL EXHIBITION 2019, is organized by TICA in collaboration with Zeta Center for Contemporary Art and supported by the Land Steiermark – A9 Kultura, Europa, Außenbeziehungen.

Peter KUTIN works with sound across genres. His pieces have been performed live, were screened, commissioned or exhibited at various festivals across the globe. He has written music for film, performance, theater, contemporary dance and installations. For the composition Desert Bloom, a cooperation with the German composer and pioneer of sound-art Christina Kubisch & his long time collaborator Florian Kindlinger, the trio received the Karl Szucka award in 2016. In 2019 his kinetic instrument Torso received the golden Nica at the Ars-electronica festival. He performed at Festivals such as LUFF, 2daysArt, Cafe Oto, Donaufestival, Donaueschinger Musiktage, Darmstädter Musikferienkurse, Impulstanz, Heart-of-Noise, Konfrontationen Nickelsdorf, Unlimited Wels, Transart Bozen, Elevate, SAT Montreal, Tsonami Chile, Sonoscopia Porto, IZLOG Zagreb, Control Club Bucharest, Destroy Vancouver, FNC Montreal, among the other…
http://kutin.klingt.org

Pleurad XHAFA (born in 1984 in Lushnjë). Following the completion of his studies at the Academy of Fine Arts in Bologna (Accademia di Belle Arti di Bologna), in 2012 Xhafa returned to Albania where he continued to develop projects that examine the effects produced by neoliberal political experiments. His research and critical work is the product of a post-conceptual practice rooted in documentation that is subsequently given visual and political representation in relation to the culture of our time. In 2014, Xhafa was the recipient of the “Ardhja” prize, organized by the Tirana Institute for Contemporary Art. His work has been shown internationally in many film festivals and group exhibitions, including: Alternative Film/Video Festival (Belgrade, 2018); Les Rencontres Internationales (Paris/Berlin, 2015-16), Teatri i Gjelbërimit (Galeria FAB, Tirana, 2016), Shame on you (Celje, 2015), 6th Berlin Biennial (2010), 4th Tirana Biennial (2009), Çmimi “Onufri” XIV (GKA, Tirana, 2008).
Xhafa is one of the founders of Debatik Center of Contemporary Art (www.debatikcenter.net).

Sandra WOLLNER (Born 1983 in Styria, Austria). During her studies of theatre, film and media sciences at Vienna University, Sandra began working as an Editor and Director in various formats, later heading post-production at a Viennese production company while working on her first self-produced films. 2012 she started to study directing at the Filmakademie Baden-Württemberg. THE IMPOSSIBLE PICTURE , her third year project about a Viennese family in the 1950s, was her first feature film, winning multiple awards across the globe, most notably the German Film Critics Association Award 2018 the „Förderpreis für Filmkunst“ by the National Gallery 2017, the Ingmar Bergman International Debut Award in Gothenburg, Sweden. Her second feature THE TROUBLE WITH BEING BORN is in post production.