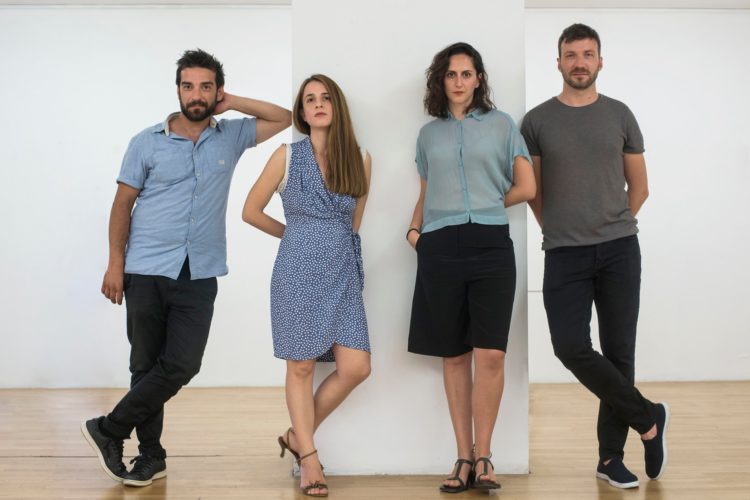 ARDHJE AWARD has the pleasure to announce the four shortlisted artists: Blerta Hoçia, Endri Dani, Eljan Stefa and Matilda Odobashi.
Each of the four shortlisted artists will present a new artistic project to be shown at Zeta Gallery in November 4, 2019.
The winner of the 2-month residency program at Residency Unlimited NY will be announced at the opening of the exhibition.

Get to know with ARDHJE Award 2019 finalists!

BLERTA HOÇIA was born in 1984 in Tirana, Albania. She studied at the Academy of Fine Arts, Florence (2003-2008) and currently lives and works between Tirana and Prishtina. She is co-founder of MIZA Galeri, an artist-run space in Tirana dedicated to emerging artists from the Balkan/Mediterranean region.

In her artistic practice she focuses in the creative process of memory, how we deal with it in the intimate and as a society. Her work tends to create an ideal dialogue with the past. She works with personal archives as well as with digital or analog public archives.

Hoçia, also has contributed as a curator to exhibitions and different artistic events in Albania and abroad.

ENDRI DANI was born in 1987 in Shkodra, Albania. He studied at the University of Arts in Tirana from (2006-2010), and currently lives and works in Tirana.
He is co-founder of MIZA Galeri, an artist-run space in Tirana dedicated to emerging artists from the Balkan/Mediterranean region.

His recent work has been deeply oriented towards anthropological research, focusing on the predicaments of local identity in the era of globalization and underlying paradoxes, particularly as they manifest themselves in material and consumer culture.

Dani’s work has been exhibited in the Kochi-Muziris Biennale, India (2016); Bienal del Fin del Mundo, Argentina (2015); Marrakech Biennale 5, Marrakech (2014), as well as in museums such as the The Israel Museum, Jerusalem (2019);Centre Pompidou, Paris (2016); MuCEM, Marseille (2016); Ludwig Museum-Museum of Contemporary Art, Budapest (2016); The Pino Pascali Museum Foundation, Italy (2015) and the National Art Gallery, Tirana, among others.

ELIAN STEFA was born in 1985 in Vlora, Albania. He studied at the Politecnico di Milano (2003 – 2009), and currently lives and works between Tirana and Vlora. He is the founder of Galeria e Bregdetit, an independent art space in Radhimë (Vlora) which aims to provide a unique context for contemporary art by the Albanian Riviera.
His research and artistic practice is based on the examination of ambiguous landscapes and their transformation due to geopolitical and environmental shifts.
Stefa’s work has been exhibited at Arup Phase2 Gallery, London (2011); Kunst Raum Riehen, Basel (2012); Tulla Culture Center, Tirana (2015); LimeWharf, London (2017); Galeria e Bregdetit, Vlora (2019), in museums such as
the Museum of Cultures, Helsinki (2010); MAO, Ljubljana (2019), as well as biennials such as EXD’11 Experimenta Biennale, Lisbon (2011); 13th International Architecture Exhibition, Venice (2012); 1st Istanbul Design Biennial, Istanbul (2012); Culturescapes Balkan Edition 2013, Basel (2013); 14th International Architecture Exhibition, Venice (2014).
Stefa, also has contributed as a curator to different artistic events in Albania and abroad.

MATILDA ODOBASHI was born in 1988 in Tirana, Albania. She studied at the University of Arts in Tirana from (2006-2010), and currently lives and works in Tirana.

The human figure and its correlation to the space is the main subject explored in her works. Themes such as adaptation, coexistence, anxiety, are conected and in a constant conversation with the surrounding space and with ‘the other’. Odobashi works in different mediums with a focus in drawing and installation. She is a member of Albanian Lakanian Circle in Tirana since 2012. She worked as an assistant professor at the University of Arts from 2012-2015.

Get to know with ARDHJE Award 2019 jury members!

AMY ZION is a writer and curator living in New York City. As of Fall 2016, she is part-time faculty at the Center for Curatorial Studies, Bard College, where she also works on exhibitions and publications in the Hessel Museum. She is a regular contributor to frieze, art-agenda, and other publications and has contributed texts for exhibition catalogues by the New Museum, NYC; The Rubell Family Collection, Miami; the Heidelberger Kunstverein; The Hessel Museum at Bard College; Museo de Ciudad, Lisbon, and Villa Stuck, Munich, and other venues. She has worked on exhibitions internationally including Albania is not Cuba for Arte Section of El Paquete Seminale, Havana; A.U.T.O.E.N.U.C.L.E.A.T.I.O.N at Sismografo, Porto as well as Slip of the Tongue, Punta della Dogana, Venice; the Danish Pavilion at the 56th Venice Biennale; and Tell it to My Heart—Collected by Julie Ault, Museum für gegenwartskunst, Basel. Since 2018, she co-organizes Frieze Talks NY with Tom Eccles.

NOIT BANAI is an art historian and critic. Her book on Yves Klein was published in the series of “Critical Lives” (London, Reaktion Books, 2014) and she is now working on a book titled “Between Nation State and Border State: Modernism From Universal to the Global Subject,” which examines the aesthetic mediation of ‘Europe’ from post-war years to the present.

She received her Ph.D. in Art History at Columbia University (2007) and taught modern and contemporary art at the University of Vienna (2014 – 2019) and at Tufts University / School of the Museum of Fine Arts in Boston (2007- 2014). She has been visiting professor at the Maumaus school in Lisbon, Academy of Fine Arts and Design in Bratislava, and Singidunum University in Belgrade; a teaching lecturer at the Museum of Modern Art in New York; and a curatorial assistant at the International Photography Center.

She worked as assistant editor for the journal RES: Anthropology and Aesthetics (2002-2005) and is a regular writer at Artforum International and Texte zur Kunst. Banai’s articles have been published in magazines such as Third Text, RES, Public Culture and Performance Art Journal; she has written essays in catalogs for: Museum of Modern Kunst – Ludwig Stiftung in Vienna, Schirn Kunsthalle in Frankfurt, Centre Georges Pompidou and Musée d’Art Moderne in Paris, Barbican Art Gallery in London, Artists Space, The Bronx Museum for the Arts, the Americas Society in New York City, and Documenta in Kassel.

REMIJON PRONJA was born in 1984 in Tirana, where he also lives and works. He studied in Italy and received his MA in Fine Arts at the University of Milan (2011). He is a co-founder of MIZA Galeri [www.mizagaleri.com], an artist-run space in Tirana devoted (since 2012) to the promotion of emerging artists from Albania and abroad.

Remijon is the winner of the 2018 Ardhje Award. He currently is a lector in Polis University.