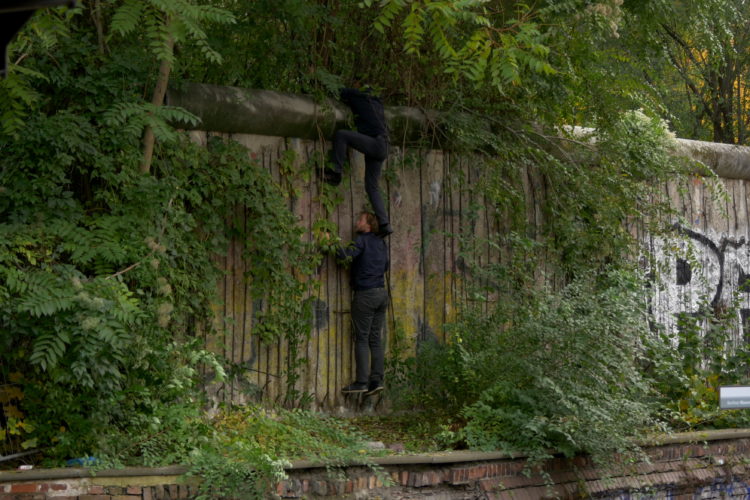 THE BERLIN WALL IN ART

Symposium/Talk on Friday 18 and Saturday 19 October 2019, within the frame of the “German October” festival “From Walls to Bridges”

Up Against the Wall: Artistic Subversion of the Berlin Wall (Before and After Its Fall)

The symposium discusses artistic strategies of subversion in art and activism connected to the Berlin Wall. From Fluxus actions in the 1960s to graffiti-writing and underground super 8 films in the 1980s to contemporary interventions,

Marie Arleth Skov, a Danish art historian based in Berlin, and Berlin curator and cultulogist Lutz Henke will track the aesthetic and activist approaches by artists up against/on/and with/ the wall —that is, the wall both as asymbol and as a material fact.

Over the decades, artists have employed absurdity and fantasy, ironic “beautification” and destruction in their artistic reactions to the Berlin Wall in particular and the concept of border barriers in general. At times, the interventions carried out from the (safe) West Berlin side comprised a double-attack on the deadly prison wall built by the SED-Regimeand at the same time on the hypocrisy of the capitalist West’s self-satisfied sanctimoniousness, as well as a dark fascination with the “thing” in-itself. After the Peaceful Revolution in 1989, the former border fortifications and its remains continued to inspire and provokeartists, by then with a new set of implications and questions concerning remembrance and actuality.

The activity is in cooperation with the German Embassy in Tirana. The symposium is held in English and with free entry. Advance registration is not required.

The artists’ workshop with curators and art scientists Maria Arleth Skov and Lutz Henke will build on the topics of the symposium (18.10) and look at artistic subversions of power structures and dissolution of boundaries in Europe today.

In addition, a variety of contemporary pieces and interventions employing the concept of artistic transgressions serves as a starting point to discuss fundamental question such as: Which responsibility do artists have in a society? Can art challenge existing power-structures? Which moral and legal implications bare artistic transgressions? How can artistic strategies and their outcome be translated to a certain context (of the art world, the general public etc.)? Eventually; what is the importance and function of contemporary artistic practice?

The lecturers have been involved conceptually and practically in most of the presented projects, which allows a hands-on-approach with a high degree of practical and theoretical reflection.

An interaction with the participants and engagement with their own projects is highly encouraged. It can be considered an entertaining master-class in artistic practice defying contemporary boundaries and frontiers, thus building bridges.

The workshop is conducted in English and admission is free. The number of participants is limited so please confirm to Zeta Gallery (at E-mail: zetagaleri@gmail.com)

All activities can be found on the website: www.tetori-german.com and in the application, which you can download through this link: https://qrco.de/tetorigerman