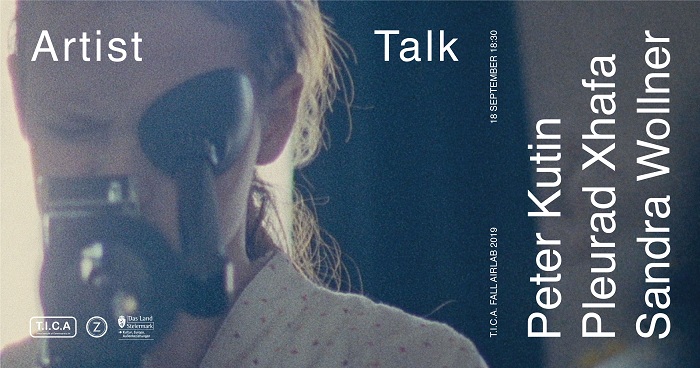 AIRLAB 2019 is organized by T.I.C.A. and ZETA Center for Contemporary Art, supported by the Land Steiermark – A9 Kultura, Europa, Außenbeziehungen.

Peter KUTIN (AT) is a Vienna based multidisciplinary artist.
Kutin’s work, installations and films hold a physical and psychological
impact and will throw you as much off balance as they embrace you. They have been exhibited, commissioned, performed or screened at various music- / film-festivals and venues across the globe. He has written and developed music / sonic-environments for film, theatre, performance, contemporary dance and radio plays. Besides that he directed experimental
short-films and wrote / composed works for radio. He has received several awards of which some are considered more and some less important.

Sandra WOLLNER (Born 1983 in Styria, Austria). During her studies of theatre, film and media sciences at Vienna University, Sandra began working as an Editor and Director in various formats, later heading post-production at a Viennese production company while working on her first self-produced films. 2012 she started to study directing at the Filmakademie Baden-Württemberg. THE IMPOSSIBLE PICTURE , her third year project about a Viennese family in the 1950s, was her first feature film, winning multiple awards across the globe, most notably the German Film Critics Association Award 2018 the „Förderpreis für Filmkunst“ by the National Gallery 2017, the Ingmar Bergman International Debut Award in Gothenburg, Sweden. Her second feature THE TROUBLE WITH BEING BORN is in post production.

Pleurad XHAFA (born in 1984 in Lushnjë). Following the completion of his studies at the Academy of Fine Arts in Bologna (Accademia di Belle Arti di Bologna), in 2012 Xhafa returned to Albania where he continued to develop projects that examine the effects produced by neoliberal political experiments. His research and critical work is the product of a post-conceptual practice rooted in documentation that is subsequently given visual and political representation in relation to the culture of our time. In 2014, Xhafa was the recipient of the “Ardhja” prize, organized by the Tirana Institute for Contemporary Art. His work has been shown internationally in many film festivals and group exhibitions, including: Alternative Film/Video Festival (Belgrade, 2018); Les Rencontres Internationales (Paris/Berlin, 2015-16), Teatri i Gjelbërimit (Galeria FAB, Tirana, 2016), Shame on you (Celje, 2015), 6th Berlin Biennial (2010), 4th Tirana Biennial (2009), Çmimi “Onufri” XIV (GKA, Tirana, 2008). Xhafa is one of the founders of Debatik Center of Contemporary Art (www.debatikcenter.net).