BLERINA MUÇA brings to the 2018 Ardhje Award a series of acrylic and watercolos paintings. The painter is mostly inspired by his son and continuously paints his image, in addition to other secondary characters.

However, we are not have just  a parent obsession with her child’s image, but a careful observation at the unexpected that the game and her child amusement  can bring  on the visual plan. An interesting moment for Muça is when the son, while playing, covers his face or portions of it with adhesive tapes. So, the artist makes on canvas, sometimes large one, quickly painted portraits on idle backgrounds. Her colors are spared, and the most eye-catching is the red on the adhesive tape that becomes the main “actor “of the painting. In Muça’s paintings, we face the dilemma that her images are burdened with. The characters are at a moment frozen, possibly captured just earlier by a photographic camera, suggesting at the same time some thinking alternatives to what we see.

Focused mainly on portraits, the large paintings  or small watercolors, capture moments of childish play, but exactly there, there is also something  dramatic, covering the face with insulating or red-colored adhesives. Covering or isolating separating) once eyes, then mouth or whole face, Muça’s portraits gets a tension carriages some sort of anxiety. Of course, it is inevitable not to think about parental concern and its impact on its work, but at the same time we are facing a ‘capture’ of those moments that appear to us as a sign language in which we are involved and try to decipher it. However, what we receive from them remains undefined and fluid. Muça’s paintings do not try to show anything but simply burden us with concern and bring us questions that we can not answer.

FATLUM DOÇI competes in the 2018 Ardhje Award with an installation. He has used pumpkins and willow branches to create a kind of sculpture that feeds the exhibition space with voluminous and material suggestions taken from nature and vegetation. You see vegetation as an element that is very close to him since his family has long been cultivating plants. For Doci, nature is a base material to use but of course contrary to its use for consumer needs. Inside the pumpkins he has set up electric lights, whose cables hide within the branches of the willows that follow them to the feeding source (the socket on the walls of the exhibition space).

The exposed objects are confusing hybrids between industrial technology and lively natural production. The conclusion where the work arrives could be precisely: this is an inevitable grafting that today’s reality and our stage of progress offers to us but also the clash between the two.

From the interior of the pumpkin comes to the surface a light that may push us to consider them as decorative objects, but mostly it tries to remind us that the source energy is precisely the nature and its inherent resources.

At the same time Doçi, try to explore the boundaries of the exposed object and its material nature. Pumpkins  are spread across the space, both on the floor and on the walls, followed by willow branches that, apart from cable coverage, play as much, a primary role as sculptural objects. Shrinking boundaries between natural and technological objects and the material and technological forces that operate on them is the terrain where the artist supports his quest.

REMIJON PRONJA competes in the 2018 Ardhje Award with the video “An die Freude, Nushid Al Farah”, which was released in 2016. The video was filmed in a classroom of the Medrese School  of Tirana, where the girls, during the class of music sing the European Union anthem in the Arabic language, directed by the music teacher. The artist entered into communication with school leaders and asked them for the opportunity to make his own video based on his experience and memories of the elementary school when the hymn of the European Union became an official part of the curriculum in music classes. At that time (mid-nineties), the hymn was translated and adapted in Albanian for elementary school students. Pronja, through the video, tries to investigate the overlaps and political influences in the field of culture. As an Albanian school, the Madrese of Tirana follows and respects the official program of educational institutions, while as a religious school established in Arabic language it is forced to adapt its curriculum in this language. This compromise is the cause of the (first) cultural contradiction that the video undertakes to present. Pronja is aware of the provocation he calls when he undertakes to bring in Arabic singing, the European hymn (Bethoven’s Ninth Symphony  with Shiler verses), a language stereotyped as a Western cultural enemy, but the artist is more interested in finding and reveal the forms of political and ideological alignment and alignment that the country pursues to become part of the larger communities. In this case, Albania swings between religious alignment, as a majority Muslim country, and the European political-economic one, subject to geographical location. Unintentionally,  and for a moment, the students of this school become protagonists of the clash of these ideologies with each other and this is exactly in their classroom hours.

SOKOL PEÇI participates in the 2018 Ardhje Award, with a printed photographic image. The photographic image titled ‘Motherland (A mirror to spit)’ shows the map of Albania configured by human saliva on the top of  a compressed earth layer. This image was produced by the artist on the occasion of the 100th anniversary of the country’s independence.

Peҫi aims to build a personal relationship with his country beyond notorious patriotic clichés. This relationship is masked through saliva, an organic matter that comes from within the body and has been historically used by postmodern artists since the middle of the last century and beyond (along with other substances produced from the human body) as an element that expresses the organic, inner, essential, and ‘decent ‘ (unpresentable). On the other hand, in a narrower and local context, spitting as an act, carries an offensive and refusing feeling. This contrast determines the nature of Peçi’s ‘statement’. It makes the homeland a subject to be hated, but at the same time an organic product of our own, which we create unconsciously continuously.

The conventional mark of the map comes out of the order in which we are accustomed to distinguish, whether it is geographic or symbolic, and is transformed into a kind of ambiguous symbol that lies apart. It is no longer a geographical or national symbol, but a personal message of the artist who, by bodily means, “produces” a kind of controversial cartography to handle the relationship between the individual and the perceptions of the community or homeland. 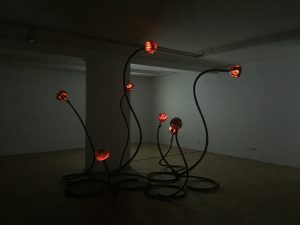 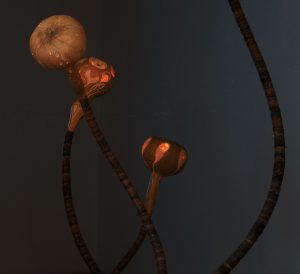 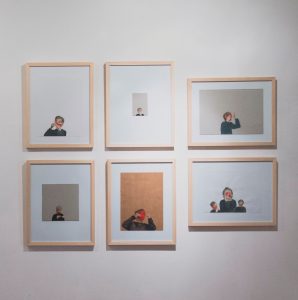 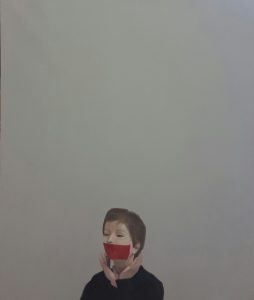 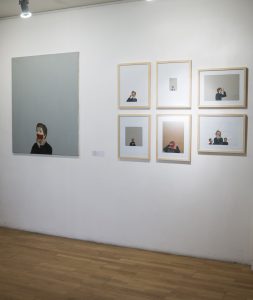 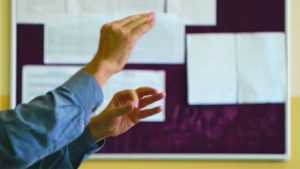 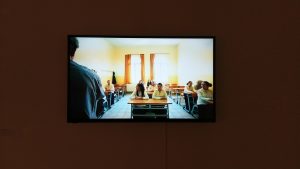 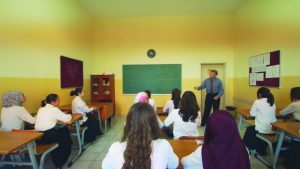 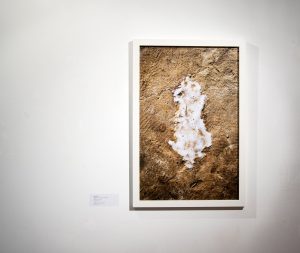