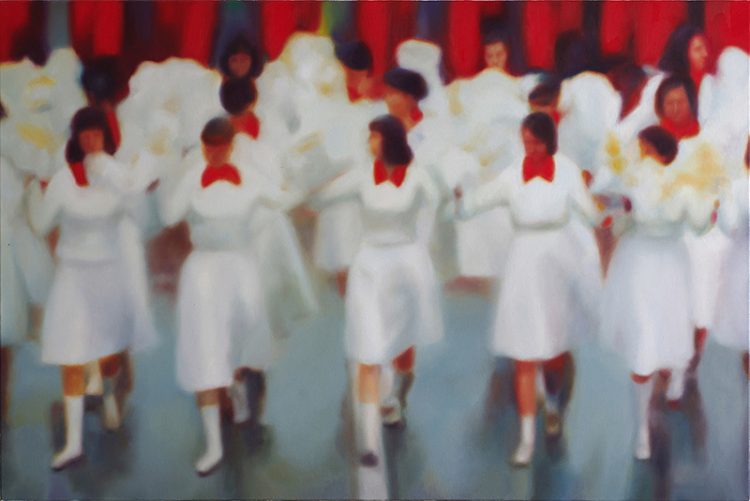 Color print technology was introduced in Albania in the late 70s. As it was an expensive and elaborate technology only selected magazines and publications with a wide national and international print run featured color image reproductions. Nevertheless, the quality of these reproductions illustrating the socialist party’s parades, the leader’s official speeches and other important events was rather bad- mismatching colors, blurred images ,and a general unbalanced color scheme dominate the reprints of the photographs documenting events considered to be important for the People’s Republic image under Enver Hoxha. The dominant color of many of these pictures is red: red flags, red tracksuits worn during official sports events, red neck scarves.

Leonard Qylafi uses these commonly known reproductions as source material for a series of paintings.The paintings reveal their photographic sources, but emphasize the blurred outlines of the depicted people, transforming them into abstract mass ornaments. They focus only on a part of the original photo as if zooming into the parades and events, which are compositions of choreographed bodies themselves.The level of abstraction varies from soft contours to vanished outlines merging individuals into a composition that only at second glance is based on a mass of people standing in rows. Although Qylafis’s paintings maintain fragments of the original composition, the transfer from the book page into a painting is a synthetic one that focuses on the pictorial aspects of the subject. Like time capsules opened after several decades the selected pages from books and magazines reveal their propaganda aesthetics. These are simultaneously emphasized and rewritten in the process of painting.

Leonard Qylafi  (b.1980) graduated by the Academy of Fine arts of Tirana in 2003(atelier of painting) is an Albanian artist working in different mediums such as video, photography and painting, which work has been exhibited internationally in spaces and institutions such as: 55-th October Salon Belgrade/Serbia Kunstlerhaus Bethainen, Berlin/Germany, Kunst Raum Riehen Basel, MODEM Museum for Modern and Contemporary Arts  Debrecen/Hungary , ISCP- New York /USA ,ArtPoint Gallery Kulturkontakt  and Vienna Art Fair /Austria, KunsthalleKarlsruhe /Germany. Participant at Tirana International Contemporary Art Biennial,  XIII Biennal of young artists from Europe and Mediterranean etc. To Leonard Qylafi  has been awarded several residency programs by; NIFCA-Nordic institute of contemporary art Helsinki/Finland, ISCP New York /USA, KKA-KulturKontakt Austria and TICA-Tirana institute for contemporary art. He is the winner of “ARDHJE” award for Albanian young artists in 2008 .He lives and works in Tirana/ Albania. 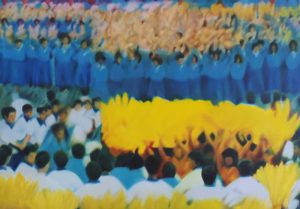 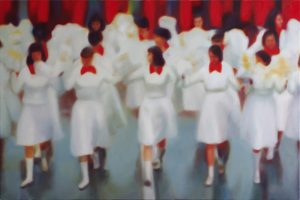 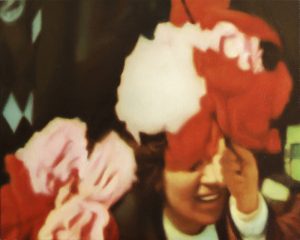 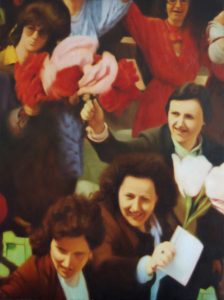 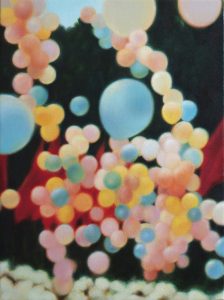 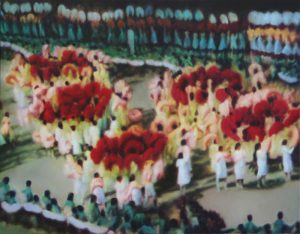 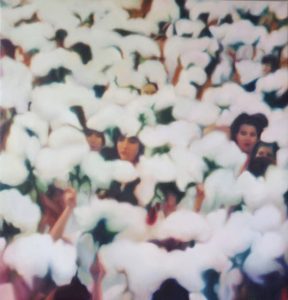