“If you want to be understood, don’t give any explanations.” (Diderot)

More than just to say or address something, the following lines touch briefly a concern related to a typical tendency of the time: the reduction of art work into a certain concept or idea, which in most cases deals with an aspect of the actuality. A tendency to transform the work into a concrete object, suffering from the lack of shade; into a consumer commodity to be consumed quickly and easily, and digested also as quickly and easily as all the market goods. Even the art work may and must be genetically modified. Maybe this is a kind of falling of the art into reality.

The issue is deeper as it appears, since we find its roots in the worldview “man is the measure of all things” (Protagora), which means that everything must come down to the level of human, and therefore of reason. Thus, everything that cannot be encompassed by reason, is either irrelevant, and as such we do not need it, or it does not exist, and as such it should be left behind. Accordingly, what suffices and should suffice us is reason/thought.

Imagine how absurd it sounds in the context of art today that saying of De Chirico stating that “my paintings are understood only by one man in the world: that’s me”! Obviously with the term “understand”, De Chirico did not aim only at the rational side of understanding, but also at the irrational one. In other words, he meant rather the experience, that understanding that does not fit the language/word, which remains an internal occurrence, because he was marking the creation asthe chief-experience. But now it is as if there is no creation; there are more and more interventions to the ready and made market or cultural products by re-circulating them through a different significance, and the most famous in this regard is Duchamp’s Fountain. This “other”sense of them is concrete, accessible by anyone, it’s enough to read the text at work or ask the author; as we usually do in a supermarket when we want to know about a product, reading the respective data.

There are no and there must not be any mysteries. Everything has a meaning and it must have one, because everything must have a certain function, the artwork, the artist himself (the man).

“Once excluding all transcendence, things are simply what they are, and as such they are unaffordable. They are immediately and completely real, without any shades, without a comment. A ready and made giant” (Baudrillard) that does not intend to make any pact with us.

In this context comes the title of this exhibition: No-thing – meaning, none of the works starts a priori out of a certain concept or idea, but out of a direct act, offhand. Each of them is a moment of disinterest toward the things surrounding me and toward the daily harassment or interference, and therefore an attempt for a vertical experience.

I see that I’m falling into the trap of a treatise, so I’m leaving it at this.

Edison Çeraj was born on 28 August 1982, in Shkodra. He finished his studies in the Academy of Fine Arts (today University of Arts), where he currently lectures at the Atelier of Multimedia. He also holds a master degree in philosophy. His activities include two personal exhibitions: “In the research of the lost colours” (2008) and “Optional Subject” (2014), as well as participations at some other collective exhibitions. According to his field of research, he wrote three books: “Art as a possibility” (Izabel, 2008), “Researches in the metaphysic of art” (Logos-A, 2012), and “The node of forgetfulness” (unpublished). 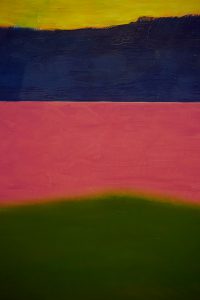