Image of two human beings who form a family. In real life they are a couple. In both videos the process is followed with close plans. In the first video the man realizes various regulation processes, while in the end, the tuning of a pianoforte. This process unfolds bringing to mind the Kandinsky similitude for piano and artist elements, which seeks to aggravate the important hierarchy of elements. Performing without a public is not made by an artist and this process tuner forms a casual ‘melody’ without a score. At the other video we discover the craft of the old and noble woman, embroidery, where hand by hand we discover that she outlines her husband’s working object. It is understood that not only their legal documents makes them be a family, but also belonging to the same family background entity: people working for the surface but focusing more on the inside of the object. One such positioning behind scenes and appearances, is intimate and unites both of them in lifestyle and action. Against fluctuations of the everyday life and their varied shades of daily life takes a poignant and poetic nuance. More than saying something openly the artist poses a question to itself as such. 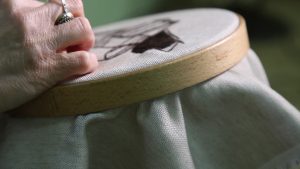 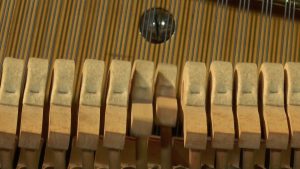