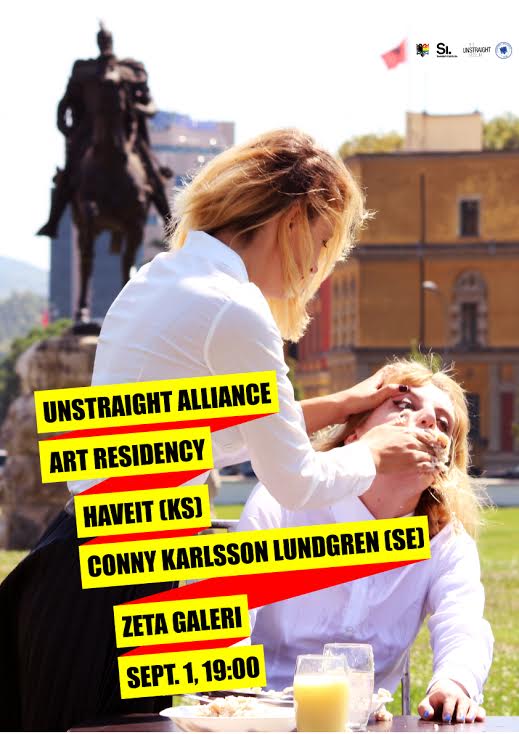 at Zeta Galeri in Tirana.

HAVEIT is a performance art collective from Kosovo, comprised of Hana Qena, Vesa Qena, Alketa Sylaj, and Lola Sylaj. In their performance “Jepi me gojë” (Use Your Mouth), which takes place in the sterile public space of Skënderg Square in Tirana, they construct a cold, monotonous yet familiar environment in which food, family, and love try to give slavery a new meaning, now and forever. https://www.facebook.com/haveit Conny

Karlsson Lundgren will present his work “Koncert në vitin 2014” (Concert in the Year 2014), which departs from the 1978 Albanian film “Koncert në vitin 1936”, which formulated a subtle, yet sharp critique of the Communist system (from) within the system itself. As catalyst in the film, two traveling women perform “Zare trentafile,” a very well known love song addressed to a woman. The song is part of the Albanian Urban Lyrics tradition, made popular in the 1930s by the Albanian soprano Tefta Tashko Koço. The actress in the film lip syncs to the original recordings. By way of three interpretations – photographs, archival material and a special restaged performance with a performer from the Aleanca LGBT in the Piramida – the connotations and meaning of the song are investigated. The series of works raises questions on how existing narratives are being used, how these can be interpreted, and how we identify with them and make them our own, when nothing else is there. http://connykarlsson.se

The Unstraight Alliance Art Residency is a collaboration between Aleanca Kundër Diskriminimit të LGBT from Albania and The Unstraight Museum from Sweden, kindly supported by the Swedish Institute. After the presentation in Tirana, the exhibition will travel to Stockholm. http://www.unstraight.org http://www.aleancalgbt.org