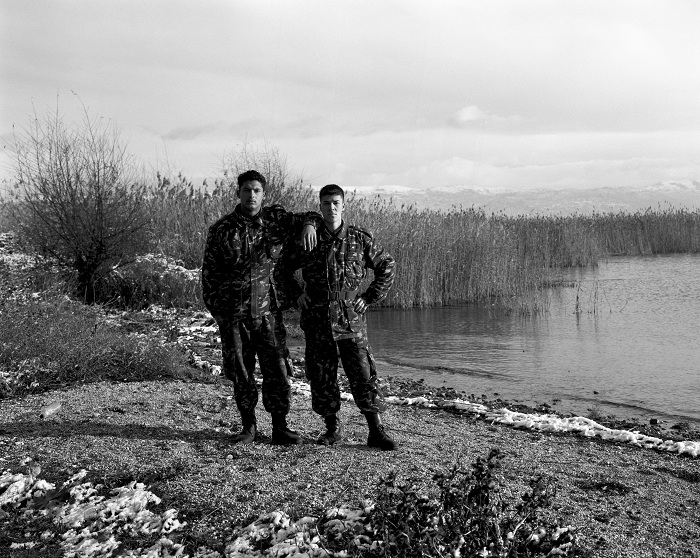 EXPLORATION OF A LANDSCAPE

Historical legacies and everyday-life in the Macedonian-Albanian border area.

Robert Pichler received his PhD in history at Karl-Franzens University Graz where he works as lecturer and researcher at the Centre for Southeast European History and Anthropology. He conducted extensive field research in Northern and Southern Albania as well as in Western Macedonia. He published widely on family and kinship, migration and transnationalism, upland communities and political history. As a photographer, he works at the interface of documentary and art photography.

The event and the catalog (in Albanian language) were supported by Austrian Embassy and Raiffesein Bank.

Exploration of a landscape is the outcome of a multi-annual involvement with historical legacies and post-socialist life-worlds in the Macedonian-Albanian border area. The multi-layered legacies have left their traces in the landscape; they are reflected in the multicultural constitution of the region, in the ongoing ethno-national struggles and the social and economic relations. Overcoming the dictatorial regime in Albania and the authoritarian order in Macedonia has not led to the hoped-for upturn so many people had dreamt of. The neo-capitalist system has created new dependencies, swept away social security and transported inequalities that are significantly more pronounced than in the West. On the other hand, the opening of the border has triggered a hitherto unprecedented mobility, which put the region in a short time in relationship with the world. The dynamics of social transformations has vastly accelerated without a clear direction would be recognizable. Too complex are the processes of change and too contradictory are their orientations.

The legacy of the border

The border itself is among the most pronounced historical legacies, their drawing in the wake of the Balkan Wars (1912/1913) has cut through formerly closely related economic and social areas and pushed developed urban centers to the periphery. Border-drawing went hand in hand with state and nation-building processes. In Belgrade-administered Macedonia (, Southern Serbia ‘) great efforts were undertaken to ‘Serbianize’ the Orthodox and the Slavic speaking Muslim population. The Muslims, however, lost their previously privileged position and came under strong pressure from the new regime. As a result of colonization, marginalization and oppression many decided to emigrate to Turkey. Those who stayed behind retreated to their traditional institutions and remained in rural backwardness.

In the Second World War the borders were redrawn and the power relations shifted again. While large parts of Macedonia came under Bulgarian administration, the western areas were annexed to the Italian managed Greater Albania. The Albanian population in Kosovo and Macedonia experienced this change of power as liberation from oppressive Serbian dominance. The advent of the partisan movement, which focused on resistance against the fascist occupiers, found among the Albanians in these territories only limited support.

More pronounced was the Albanian resistance against the renewed inclusion of Kosovo and Western Macedonia into Socialist Yugoslavia. With Yugoslavia’s expulsion from the Cominform in 1948, the border area was transformed into a hermetically sealed zone. The monitoring and the indoctrination of the population contributed to mutual alienation, but they also spurred the imagination about life on the other side of the border. Not only a few people projected their aspirations for a better and fairer world to the unattainable other side of the border. When the border was opened in 1991 and the Albanians from Macedonia for the first time traveled to get there, the disappointment of the prevailing misery was great.

It took years until reciprocal perceptions became more differentiated. Today, people who cross the Albanian border mostly head to the Adriatic Sea for summer holiday. What lies in between, is a transit country. The influx of Albanians to Macedonia is more modest, in addition to tourists who like to visit Sveti Naum/ Shën Naum, there are mainly male job seekers who hire themselves out as casual workers in the villages.

What was Communism and what remained from this period?

No system of government has affected people’s lives as profoundly as communism did. The reforms to catch-up modernization were of breathtaking speed and aimed at re-determining the human conditions as a whole. Despite similar objectives, the Albanian and the Yugoslav communism have taken different paths from the 1950 s onward. Whereas the Yugoslav system gradually loosened its tightness and backed decentralization and self-administration, the Albanian leadership continued to pursue the Stalinist way that drove the country into isolation.

In Yugoslavia, the demise of the socialist system went hand in hand with a bloody disintegration of the state, in Albania the totalitarian order imploded, leaving behind a country on the brink. A liberal market economy is intended to transform the national economies and bring them closer to the EU. The period of real socialism is to be made quickly forgotten. But can the current developments be understood at all without a thorough examination of the socialist past? Can the traumas ever be healed without having to deal intensively with this time and their heritage?

That socialism would disappear once was unthinkable for a long time as it is unthinkable today that capitalism will dissipate.

Is a future oriented thinking solely based on the circumstances of the present or rather forms the socialist past the starting point for many judgments and decisions?

Once, the working class was crucial for the achievements and the rise of socialism. The decay of the centrally planned economy not only discredited socialism as such but also the image of the workers. They are still often associated with the stigma of failure.

The ideal of the post-socialist economy is the family-run enterprise. Who can dispose on tight kinship networks is able to dispose on resources and capable to make a living in the neo-capitalist system.

The border area is marked by a distinctive cultural diversity which is even more pronounced at the Macedonian side. Nation-building processes contributed to a politicization of ethno-cultural differences in the course of the 20th century. In socialist Yugoslavia, ethnic differences were institutionalized and the population was divided into ‘nations’, ‘nationalities’ and ‘ethnic groups’. The Albanians were recognized as a ‘nationality’, the status as a ‘nation’ has been denied to them because there existed already an Albanian state. The Macedonians, however, gained the status of a nation. With the disintegration of the Yugoslav federation and the independence of Macedonia in 1991, the status issue was re-opened. In 2001, an armed struggle between Albanian rebels and Macedonian security forces broke out over this issue which was settled only after international intervention. The Ohrid Framework Agreement, settled in August 2001, largely met the Albanian demands, however, the ethnic segregation of society could not be overcome.

When the mayor of Gostivar in July 1997 hoisted the Albanian and the Turkish alongside the Macedonian flag in front of City Hall, serious riots broke out after police intervention which left two people dead and many injured. For the Macedonian authorities, the use of the Albanian flag signaled the pursuit of territorial autonomy and, subsequently, the establishment of a Greater Albania. The Albanians argued that the flag was an expression of their cultural links with the Albanian nation only. Their efforts would not be directed towards separation but to attain equality within the state. The incident signifies the lack of Albanian integration into the social fabric of the Macedonian state. It also reveals the predominance of ethnicity as a primary source of loyalty in the multiethnic environment of Macedonia.

The visible signs differ from the invisible.

The armed conflict has left deep wounds. The martyrs of the war are stylized heroes, their deeds attain public attention, they should find its way into the collective memory of the ethnic community.

The ethnic polarization not only affects the Macedonians and the Albanians, but also the demographically smaller communities like the Macedonian-speaking Muslims, the Turks, the Egyptians, Roma and Bosniaks. Their ethnic affiliation is contested and still their identities are not consolidated. Democratization also means that cultural differences are highlighted and showcased. Differences are given higher priority than similarities which reach beyond the ethnic particularities.

Also among Muslims contradictions have sharpened, also here disputes revolve around the ‘pure doctrine ‘. Members of the Bektashi Order are in the worst position, they are blamed for their great tolerance and openness, their traditional heterodoxy irritates the devout. The orthodox Sunni Muslims who criticize the Bektashi, come under pressure by fundamentalist Wahhabis who reject even the state and its laws because they do not derive from the divine revelation.

The cross shape of the window most captivated me about this scene. It seemed to me as if the legacy of a close-knit Christian-Muslim culture manifesting itself at that moment. When I again visited the mosque in 2013, the window was replaced.

Whereas Albania experienced a ‘migration explosion’ with the collapse of the dictatorial regime, Yugoslavia had already opened its border for labor migration in the 1960s. To combat unemployment and to bring foreign currency into the country, surplus’ workers were given the opportunity to work abroad temporarily. About this track 100,000s of ‘Yugoslavs guest-workers’ went to Western Europe.

Due to its rapid population growth and weak integration into the regional labor market Albanians and Macedonian-speaking Muslims in the Republic of Macedonia were more affected by migration abroad than orthodox Macedonians. The predominantly male migrant workers often took their relatives and friends along and thus developed trans-local migration networks between their places of origin and the destinations abroad. The original plan to return home after some time was not realized by most migrants. The incentives of better income abroad and the difficult situation in the home country triggered this situation. Since the fall of communism it comes to increased emigration of women and children as well. Ties to the places of origin, however, are still maintained, which is reflected in the construction of houses at home and in a pronounced ‘culture of rituals’.

The ‘guest workers’ migration’ in many ways tied to contours of migrant labor as they were common in the Ottoman period already. The migration was temporary and the earned money abroad was used to supply the families to build new homes for the purchase of agricultural equipment and land.

With increasing duration and intensity of labor migration exerted enormous influence on the social and economic development in the region of origin. Visible evidence are the fundamental architectural changes that have taken place in the migrant villages since the 1960 s. With the investments in the construction and in the infrastructure of their villages the migrants emphasized their close social ties to the homeland.