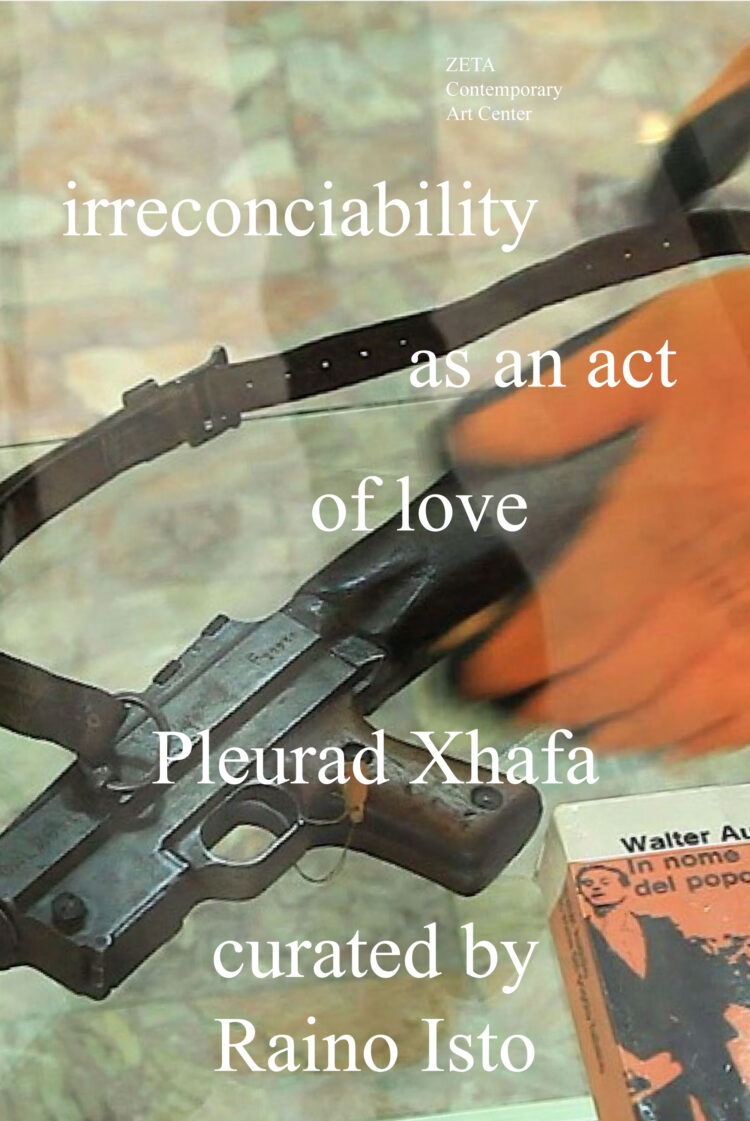 Irreconcilability as an Act of Love is a retrospective exhibition presenting the work of Albanian artist Pleurad Xhafa. The exhibition features new works by the artist, and a survey of Xhafa’s interventions and creative output from roughly the last decade and a half.  Irreconcilability as an Act of Love takes as its central theme the relationship of the artist to society and to contemporary political realities. Weaving together care, confrontation, memory, and defiance, the exhibition explores the potential for artistic actions to both sustain narratives of resistance and disrupt dominant neocolonial and neoliberal discourses.

The works on view reflect Xhafa’s persistent investigations into the relationships between capitalist ideologies, transformations of urban space, collective memory, and geopolitical power at work in contemporary Albania. These investigations sometimes take the form of provocative interventions in public space, while in other cases they expand the poetic possibilities of documentation, reinforcing the intertwinement of experience and evidence. Irreconcilability as an Act of Love highlights Xhafa’s engagement with specific events that have shaped Albania’s recent history, and his efforts to trace the transnational flows of policy, capital, and political pressure that drive the intensification of neoliberal capitalism in the country today. What emerges is a pattern of systemic exploitation that manipulates both the built environment of Albania and the lives of its citizens, erasing histories and denying forms of agency that cannot be transformed into individualized consumption.

This context of exploitation and consumption confronts viewers immediately upon entering the space: the crumbling clay bust of Milton Friedman—a remnant of Xhafa’s early collaboration with Sokol Peçi, Déjà Vu & Paranoia—gazes across the gallery. Friedman’s presence constitutes a symbolic anchor: it signals the reconfigurations of political and economic power that have shaped postsocialist Albania, but its decaying material state also reflects the waning credibility of the freedoms and futures that neoliberalism promised. Juxtaposed with Friedman’s bust is the film Tireless Worker, a lengthy documentation of the life of a worker in a cement tile factory, a work that emblematizes Xhafa’s consistent engagement with the lives of working-class people, and the grim realities of their working conditions in capitalist Albania. In recent years, the death of one worker in particular—that of 17-year-old Ardit Gjoklaj, who was crushed to death at his job site in the Sharra landfill on Tirana’s outskirts—has drawn critical attention to policies that protect the interests of private companies and celebrate the proliferation of public-private partnerships in Albania, leaving workers in ever more precarious conditions. In the center of the gallery, Arjan Serjanaj prepares a block of stone with Gjoklaj’s name, a stone to be taken and placed in Skanderbeg Square—a square whose vast expanse also symbolizes the erasure of lives and histories that cannot be reconciled with a narrative of neoliberal triumphalism.

Against this systemic violence, Xhafa’s works highlight moments of resistance—as in Lot #3, where the artist retraces an act of vandalism carried out by Tirana residents during protests against the impending destruction of their homes to build a new section of highway. What emerges in this work, an expansive and abstract line drawing on tracing paper, serves as a kind of map for the conceptual world of Irreconcilability as an Act of Love more broadly: an open space of potential and radical reinterpretation, where new social structures can emerge. These moments of radical action, these zones of possibility, often exist in tension with the rhetorics utilized by American and West European governments, rhetorics that demand above all “stability” in Southeastern Europe. Xhafa’s reflections on these discourses of progress, freedom, and stability emerge in the exhibition in works like Security Message and vizə, works that trace the effects of transnational geopolitics on the lives and dreams of Albanian citizens today.

Elsewhere, Xhafa’s work is concerned with holding open spaces of memory—taking the time to mourn, and transforming the act of mourning into a demand for justice. Monument to Failure reminds us of the tragedy of Gërdec, of the 26 people killed and 300 injured by the explosion of munitions that they had been put to work dismantling as part of an arrangement between the US government, the Albanian Ministry of Defense, and private companies. The soft glow of the resistance heaters in The Darkness and the One-Way Path (dedicated to 6 citizens who committed suicide after being unable to pay their electric bills in the wake of new regulations on electricity payments) reminds us of the human cost of the capitalist degradation of social support. Red Carnations keeps alive the memory of the four protesters murdered by the Albanian National Guard on 21 January 2011, deaths for which no one has been held accountable.

The inability to be reconciled and the refusal to reconcile oneself—with inequity, with injustice, with all the ways that the apparatuses of power exercise their manipulative agendas. It is from this difficult situation, an impasse that could just as easily lead to hopelessness, that Xhafa’s work brings before us the immediate and open-ended character of action, of the single act and the collective act, a transformative moment that has no easily predictable outcome. It is in this sense that the irreconcilability of these works can be read as an act of love. Like acts of love, they contain an element of self-denial: our calculations and our plans disappear, and we stand to lose nothing—or everything. Memory and need, refusal and urgency, but above all, love: these factors coalesce in Reassemble, a work that returns viewers to the scale of history, and to the possibilities of radical action. In the act of reassembly, the artist shows us the need to make a choice, to take a stance, to remain steadfastly unreconciled, because only out of that irreconcilability can we conceive of an action that opens new spaces of imagination.

About the Artist: Pleurad Xhafa (b. 1984, Lushnja, Albania) is a visual artist and activist currently based in Tirana. He received his MFA in 2012 from the Academy of Fine Arts in Bologna. He is one of the founders of the DebatikCenter of Contemporary Art (www.debatikcenter.net). In 2014 he was the winner of the “Ardhje” Award for Young Visual Artists from Albania. Xhafa develops projects that examine the effects produced by neoliberal political experiments. His research and critical work comes as a result of a post-conceptual practice, which operates on a documentary basis to subsequently report—visually and politically—on the culture of our time. Some of his site-specific interventions in Tirana have been realized in collaboration with the DebatikCenter of Contemporary Art, the Department of Eagles, and MAPS: the Museum of Art in Public Space. His work has been presented in international group exhibitions and festivals such as the Alternative Film/Video Festival (Belgrade, 2018); Les Rencontres Internationales (Paris/Berlin, 2015–16), Teatri i Gjelbërimit (Galeria FAB, Tirana, 2016), Shame on you (Celje, 2015), the 6th Berlin Biennial (2010), the 4th Tirana Biennial (2009), and Onufri XIV (GKA, Tirana, 2008).

Irreconcilability as an Act of Love will be on view at Zeta Contemporary Art Center, with an opening reception on Thursday, 7 April, at 18:30.