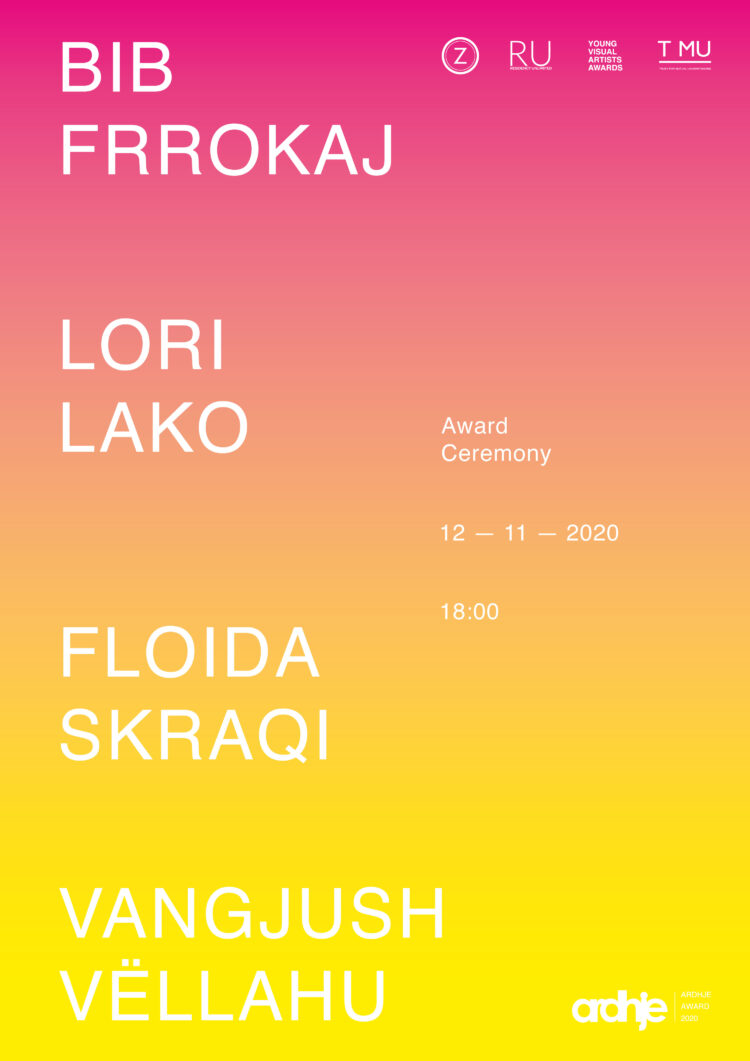 Find out more about them here

Bib Frrokaj, the long wait, video, single channel, color, 9’ 15’’, 2020
Bib Frrokaj’s work, The Long Wait, is a video/ film shot against a striking landscape. The artist has chosen to shoot a scene with himself being in the middle of a large and flat field, the only surroundings at that. This is the field of an abandoned airport, ‘planted’ recently with cube-shaped concrete blocks, placed horizontally and distributed almost symmetrically alongside the runway. They almost resemble a land art, even though their function is to disable the runway. In the meantime, the appearance of the artist himself, as the only vertical figure in these surroundings, invites us to watch some sort of performance, or some nearly body art so as to build a relationship with this as inspiring as contradictory space. Frrokaj’s acting in front of the camera is reduced to a concrete block for him to sit on, or lie down, or lean against. His ‘wait’ translates into a gesture designed to convey meaning and significance. Even though it is left up to the viewer to do the guessing, the work is intended to capture a moment of arrest, coinciding, in author’s view, with both his personal feelings, and the society of which he is a part (a society, which happens to be in an ‘infinite’ transition moment). Appearance of the artist-actor barefoot reinforces the subjectivity of his gesture in the chosen landscape. While the flat ground and the wide field of the runway are indicative of one’s breathing and freedom to press onward, the concrete blocks interrupting it are telling us that the ‘flight’ is impossible.

Lori Lako’s installation entitled Suspense consists of a video and an image of photographs in large format print. The video is realised through aerial shots (from an elevated point) of an abandoned industrial plant inherited from the socialist era. The plant seems to lie untouched, despite the fact that a long period of time has gone by since work in it stopped. The aerial camera follows an industrial cable-car track used to transport the raw material for the production of limestone. Against the silence of machinery, the soundtrack evokes the former noise of the site. A wagon loaded with limestone is hanging from the steel cables midway through the old track, as if to stand for the title to this work, even though the word ‘suspense,’ despite originating from the verb ‘suspend,’ means anxiety or apprehension. The video has captured a real moment of the freeze on the time. The printed image is an overlap of ‘stills’ taken from two different videos. The image merges a view of (framed from under) the wagon hanging from the cable-car cables with a curl of smoke arising from the site where limestone is quarried nowadays (mostly in a primitive manner by burning material very adversely impacting on the environment), as a human figure stands close-by. This overlap or contradiction gets us mull over both the social and environmental disaster that followed the industrial disaster, related to the fall of the regime, in the country’s reality. If former industrialization was intrinsically a political project, and the technological modernization that it brought along, mostly the motto of propaganda, its apocalypse produced huge regress of which consequences are still out there. Lako’s work reflects these historical vectors that keep moving forward and backward, while the individual beheld in the image, who at some point in time, indicates some indistinct direction, is the symbol of the human drama this history has produced.

Sisyphus’ Labour is the title of a video shot with the camera staying in a fixed position. The focus is on two hands working on a marble table reminding us of a kitchen setting. In this type of visually sterile setting, the hands try to scrape, cut, and break a small stone to pieces by making use of various cutting, scraping, grinding, and mashing kitchen utensils of everyday use. Evoking the absurd, the video introduces us onto the maze of existential angst. At the same time, it generates rhythm and intensity through repeated action (even though produced by means of different devices), being a traditional practice of acquiring and absorbing knowledge. This imparts a conceptual nature to the work. Creating tension, the video is an effort to dissect the appeal and the elements constituting it, hence, the work of art itself. The act of breaking the stone to pieces, or better say, of failure to break it to pieces, is followed by the second act. The hands collect the dust left over by the metallic devices, which have been employed to work on the stone. As a matter of fact, dust is quite a tiny element, visually quite invisible until the moment when the hands collect it, and place it on an electronic device used as a scale. This act, as well as the ‘breaking’ act in and by itself, is not at all intended to collect any objective information about the weight of the mass obtained through the rubbing of the stone; it is instead intended to incorporate the statistics of weighing into the normative determined by the work practice. The weighing of the dust obtained provides the process with a deeper technological meaning, placing it on a welldefined expressive level. Hence, a measure of ‘labour’ is obtained by bringing to a close the operation in search of the definition of the essence of work.

Vangjush Vellahu’s work “A Tool of Resistance” is a video installation consisting of two screens, which introduce us to what is happening on the West Bank between the Palestinians and the Israelis. This video installation is designed to narrate the everyday reality of the Palestinian population in Hebron, and its resistance to the Israeli army trying to keep the region under control. In order to be able to develop this narrative Vellahu traveled to the region, where he contacted the Human Rights Defenders, a local group, which also offered him the footage they had prepared. This group makes use of the camera and video as a tool of peaceful resistance to oppression and terror struck into the city on a daily basis by the Israeli army. Video recording, and then, publication of events helps to show the world what is happening in the country. This type of information, and its circulation, faces examination by the Israeli authorities, which are trying to ban the gathering of information on Hebron’s streets. The video installation containing Vëllahu’s footage, and interviews, and archival material allowing an insight into the Palestinian history and reality, is an effort to reflect precisely this moment. As well as representing Vellahu’s advocacy in favour of the Palestinian cause, the work explores the role and nature of the video and documentary film nowadays, in situations of conflicts and oppression of the human rights. The work “A Tool of Resistance” is part of a series of documentaries the artist has made in different countries affected by long years of severe conflicts. The artist looks at his work as one more voice in defence of the people and communities faced with continual oppression and violations, as the international community is indifferent, and oftentimes, uninformed as to what is happening.

The Ardhje Award is an international prize for contemporary visual artists from Albania, initiated in 2005 and joined the regional network YVVA – The Young Visual Artists Awards in Central and South Eastern Europe in 2007.

The Ardhje Price is already an annual competition and award, aimed at promoting creativity, public exposure, and contemporary art in Albania and internationally.

Ardhje Award, as well as similar prizes in Eastern and Southeastern Europe, is conceived as an open competition addressing young artists of Albanian origin up to 35 years of age to apply and take part in a transparent process, that does not only offer the opportunity to create new works and present them at a group exhibition of selected finalists, but also to support their artistic and professional development. A jury, composed of local and international experts in the field, selects 4 finalists, who are provided with an allocated production budget, the curator and the exhibition venue in Tirana. Jury’s decision about the winner depends on the candidate’s artistic merits and prominence demonstrated by the artistic portfolio and CV; the particular artwork presented at the finalist exhibition; the results of an interview with the international jury; and the potential to benefit from immersing oneself into the New York art scene during a two-month stay at Residency Unlimited.

The 2020 ARDHJE Award is organised by ZETA, a Center for Contemporary Art in Tirana with the support of the The Trust for Mutual Understanding – New York,  YVVA – The Young Visual Artists Awards and  Residency Unlimited – New York.

The exhibition will be open till December 4, 2020