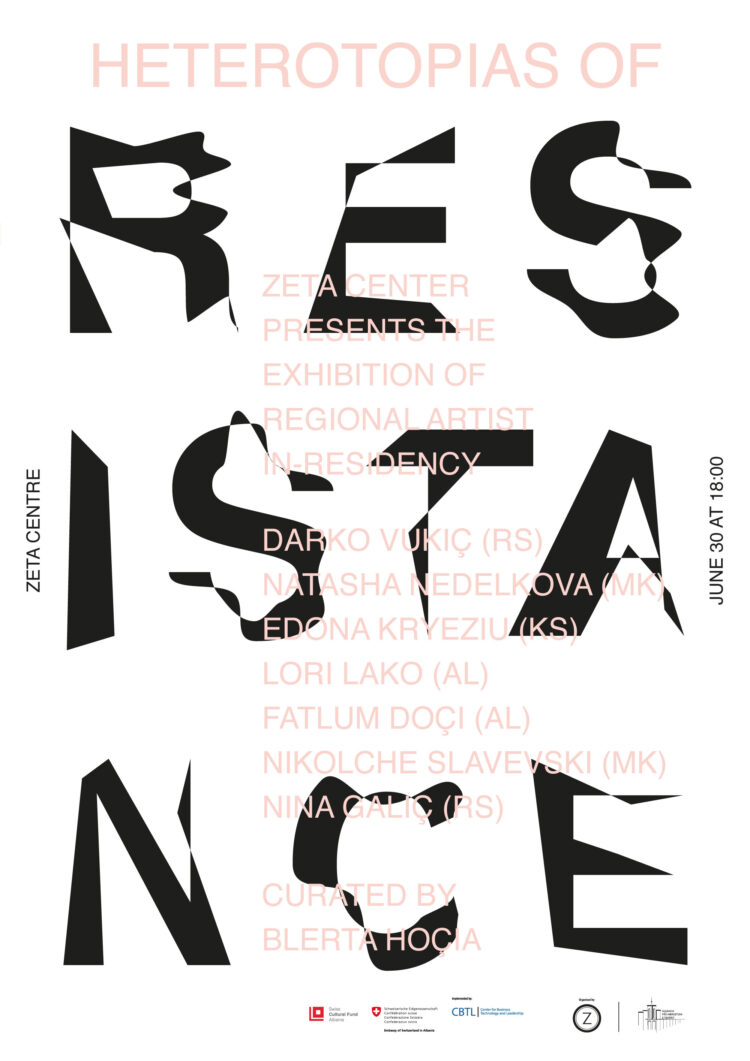 HETEROTOPIAS OF RESISTANCE | Exhibition of the Regional Residency Program in Tirana

This exhibition presents the work of 7 artists from 4 countries in the region, as a result of their artistic research during the residency program “Resistance” attended in Tirana, organized by ZETA Center and supported by Swiss Cultural Fund in Albania (SCFA), a project of the Swiss Agency for Development and Cooperation (SDC).

When we first began working on the artist-in-residence project, which we spontaneously entitled “Resistance,” we had no idea of the scenario that would unfold in front of our eyes, only two days following the beginning of our work. A scenario of numbness and insecurity that, due to its invisible nature, would become larger through internal mechanisms of anxiety and methods used to exert power: this was indirectly dividing us, categorizing us and, thus, putting us under control.

The decisions made in order to contain the spread of the pandemic, also led to the increase of human rights violations. The power exerted on the assortment of their transgressions seemed to be continuously perpetuated by justifying itself.

New places of existence and resistance were born in order to oppose the absolute submission to control. These places function similarly to Michel Foucault’s heterotopias in his 1967 essay “Of Other Spaces”:

“Their role is to create a space that is other, another real space, as perfect, as meticulous, as well arranged as ours is messy, ill constructed, and jumbled. This latter type would be the heterotopia, not of illusion, but of compensation, and I wonder if certain colonies have not functioned somewhat in this manner.”

This parallelism with the colonies of former civilizations, which have been constructed as a result of the necessity to create a new world, a new place, reappears in the re-adaptation of the imagining and the designing of the Web, with social media and other countless online platforms. They act precisely as heterotopias of a simultaneously real and virtual compensation, as an infinite mirror, the particles of which reflect the multiplied instant of life in real time.

Online has become a placeless place, a heterotopia that resists the faceless gaze of power or, to be more precise, that has the power to return the gaze to the watchful eye of control. The created places float in the dense space of the Web like a multitude of all the potential resistances of each organism. In a way, the Online space is not the only one, but it becomes one of the locus of the great refusal (Foucault 1976 p,96), which unites us in our particular condition – in our resistance – that coexists with the multitude of all others.

This heterotopia shifts in the very perception of how the exhibition will be performed, where the artists’ works are sincere reflections of the present moment, each an act of resistance in itself. Thus, this same idea recurs in the space of the exhibition, through the creation of a temporary heterotopia for the duration of the inauguration, wherein next to each work, a monitor will be installed: this is where the artists will be present by means of a live stream – a position from which each of them will be able to become the gaze of their own work, thus monitoring and recording each encounter, each astonishment, each smile and each gaze.

ZETA is thankful to the regional partner organizations : Station, Center for Contemporary Art, Pristina, “Ilija and Mangelos Foundation”, Serbia; Faculty of Untapped Things (FR ~ U), Northern Macedonia, for the selection of the artists; To the artists and guest lecturers, for the collaboration and talks : Lindita Komani, Edmond Budina, Ervin Goci, Fatmira Nikolli, Ergin Zaloshnja, Pleurad Xhafa, Gentian Shkurti, Stefano Romano, Kolektivi HAVEIT, Leonard Qylafi, Luçian Bedeni, and to the entire working group that has contributed to this project.

Due to the circumstances, visitors are invited to respect security measures and social distancing.