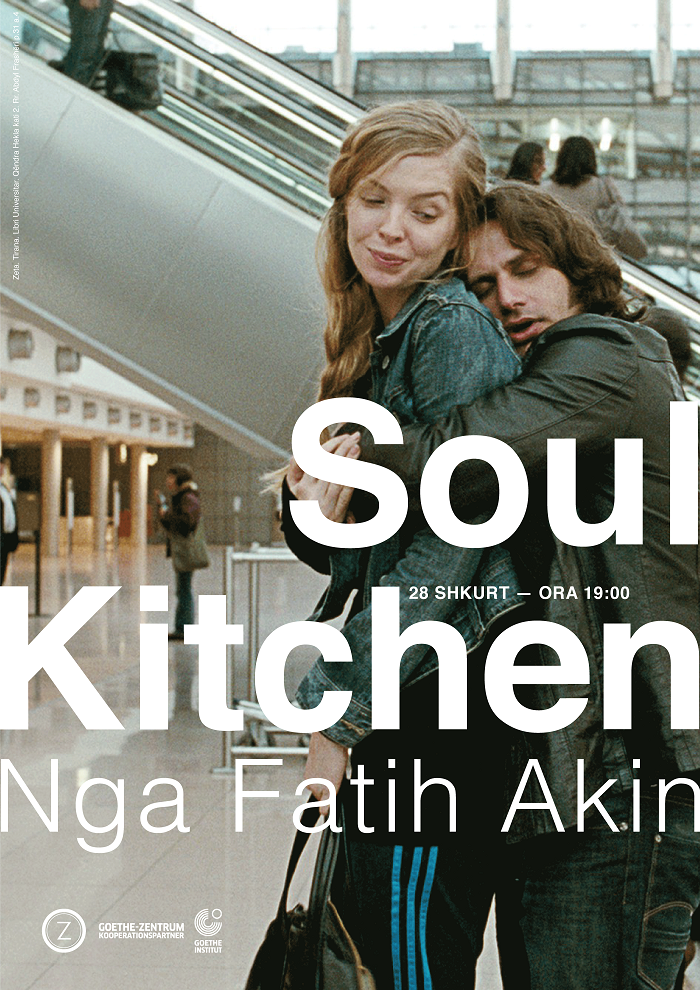 ZETA is pleased to invite you to the screening of:

This screening is in continuation of a project in collaboration with Goethe Zentrum Tirana, where one contemporary Albanian artist is invited to select a film from the film archive of Goethe Institute and to present his choice to ZETA’s public. The guest artist, who has selected the film is Alketa RAMAJ.

Fatih AKIN, the director of “Head-On” and “The Edge of Heaven”, presents a boisterous comedy. A German-Greek restaurateur is forced to defend his bistro, “Soul Kitchen”, against property sharks, tax authorities and his gambling-addicted brother when it becomes one of Hamburg’s trendy locations.
The “Soul Kitchen” in Wilhelmsburg in Hamburg is anything but a gourmet restaurant. The German-Greek owner Zinos (Adam Bousdoukos) dishes up fishcakes and potato salad, Hawaiian hamburgers and pasta bake to his regulars. It’s a charming local bistro situated in a former industrial building where there’s always great music to be heard, whether soul, funk or Greek folk music.

AKIN, the son of Turkish immigrants, was born in 1973 in Hamburg-Altona, he studied Visual Communication at the University of Fine Arts in Hamburg from 1994 to 2000. He made his feature film debut in 1998 with “Short Sharp Shock”. In 2003 he founded the production company Corazón International with Andreas Thiel and Klaus Maeck. In 2004 Akin achieved a triple victory, and his international breakthrough, with his fourth film “Head-On”, winning the Berlin Golden Bear, the German Film Award and European Film Award. In 2005 he was on the jury of the Cannes Film Festival and there, two years later in 2007, he was presented with the award for best screenplay for “The Edge of Heaven”. “Soul Kitchen” premiered in 2009 at the Venice Film Festival and won the Special Jury Prize.