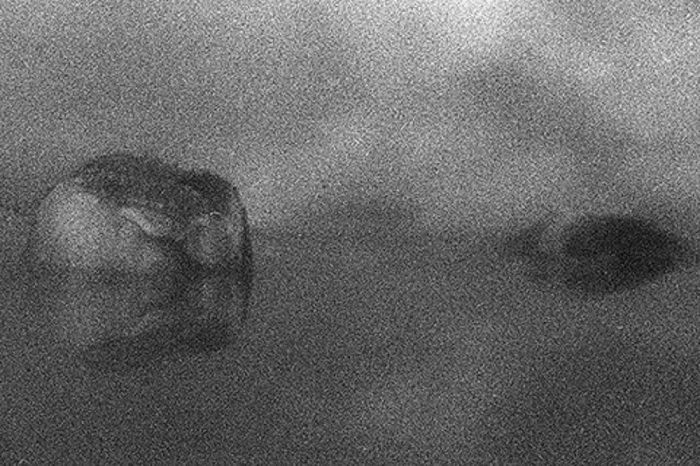 I thought of you so hard

The works of Blerta Hoçia seemingly daguerreotypes of the time of first photograph recordings, give the impression of belonging to the XIX century. But the author is actually not motivated by the nostalgia for the origins of photography. Rather, she aims to reflect the rapport between photography and arts, for in addition to being photographs, her works are almost black and white paintings.

The photography which was once perceived as a medium endangering the painting, for a long time now ceased to be perceived as an overthrowing rival. On the contrary, conceptual art gave artists the freedom to express their feelings freely using whichever medium that suits them. However, the vast increase of the volume of artifacts and photographs, and particularly the latter, raises the question of what is and isn’t art in the multitude of images constituting the building of contemporary fine arts.

The growing omnipresence of photography today has become a mega structure. The presence is so huge(ranging from living environments to the images of the surface of March and the crystalline micro structures of snowflakes…)that we are facing the phenomenon of getting overfed with images. In this multitude one hardly craves for art.

Blerta Hoçia’s starting point could be a reaction to this mind-blowing and saturated expansion. She explores another pathway –  the one of contraction instead of expansion, the one of implosion, internal movement towards moments which structure the photograph and at the same time represent instances of freedom and authorship:the moment of Shooting when the mind and the eye chose the object, time, circumstances, blend, light, angle etc.;the moment of Development of the photograph in the dark room where the washing can be newly manipulated reaching sizes which deform, reconstruct or even hide and eradicate the basic image.

This pathway is not untrodden in the mastery of photography in arts since different experiments have been undertaken to deceive the camera and the chemical process of developing of photographs. Blerta Hoçia walks this pathway in order to demonstrate an authorial approach; she does this by filtering ephemeral and secondary shapes out of the ones she selects and emphasizes as key and significant shapes of the photograph.The process at the first instance looks like a deconstruction, and later on it shifts to becoming constructive by pointing out essential rapports of black and white within the photograph. In most of these intervention works the initial motives can hardly be noticed. Only with a concentrated sight may we notice the human shapes, a face or an eye, seldom parts of reliefs, details of tree branches and flowers…

The very intervention of the author is a process which is often called a creation, but it would be more correct if we call it an artistic rearrangement of the basic image. Hoçia in fact suggests the latter denomination since Demiurgeis the name she gives to the main cycle. The antic idea of Demiurge as a deity who forges the world and the primordial chaos is quite different from the Christian idea of the origins of the world out of nothingness thanks to the omnipotence of one Creator par excellence: God created the world out of nothing!

Thus, we have an essential difference between the creation on the one hand, and the fashioning or production on the other hand.

In the process of intervention of Blerta Hoçia there is indeed an artistic Demiurge in action (in Antiquity, Plato and Aristotle used Demiurge as an analogy for the artist). Her ideas and tastes direct the rearrangements of photographs she shot herself, by using them as a Demiurge,i.e. by treating them as raw material to create the work. Her final images indeed resemble compositions where some newly formed shapes look as if coming out of fog or a primordial chaos.

But these images can also be interpreted as a work of a Demiurge of grief because the floating of subtle beauty in the abstract compositions, or the details splendidly coming out of the black and white games may be read in two aspects: the optimistic one of the call of hope that the nature, order, beauty and art will defeat the chaos, and also the pessimistic one(which I tend to consider more correct), that those are springs and ephemeral flowers of fashioning in vain, but heroic ones that never give up in their efforts to survive despite the everlasting risk from far-reaching and merciless entropy.

I believe that the value of Blerta Hoçia’s work consists in the subtle sensation, sometimes even mystical, which unveils both hopeful and explosive tensions, in the very elementary rapports within the image; tensions like the nuclear ones with almost unimaginably small foundations but with an enormous power for good and evil of the world by giving it energy and life, but also power to cause irreparable damage. 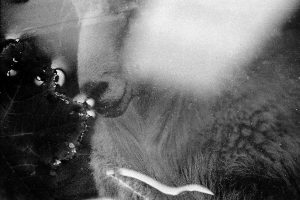 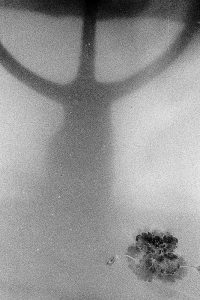 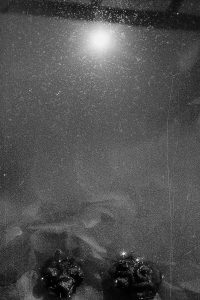 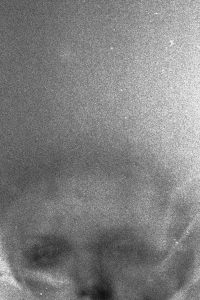