207899,121577 : Those numbers appeared on the dashboard of the artists Milena Jovićević and Željko Reljić. Without knowing where these numbers come from, we could see there a password or look for an encrypted meaning, but this is merely the distance that the vehicle of the artists has covered until now. With only a few pools of light in the darkness, the exhibition at Zeta Gallery is conceived as a journey in the night, along the roads of Montenegro. On the roads and in their margins, many things are happening. As a public space, used daily by everybody, roads reflect the image of the country they traverse. In this way, Milena Jovićević and Željko Reljić take a disillusioned look at the society they live in, at the Balkan and Montenegrin reality, raising many questions about which model this society should follow and which solutions we should choose.

Consistency and logic are often challenged on the Montenegrin roads, which are ruled by traffic laws that are subject to all kinds of little adjustments. Željko created a series of works using traffic signs: one indicates an absurdly precise maximum speed of 52 km/hour (intervention on traffic sign), and in another one the pictogram of a deer comes to life to escape the frame, leaping onto the wall (intervention on real traffic sign). Traffic laws are shifted and misinterpreted; their authority is diminished and covered with a comic appearance: Why respect something stupid? It makes us think about the disconnect between rules and their application, about the sometimes absurd and stubborn bureaucratic ways, about the everyday difficulty of enforcing codes and rules.

Željko’s photographs show details of road markings, displayed so they create lines and transversal spaces, that also play with the geometrical forms of his modified traffic signs. The road markings’ details become abstract forms, far away from their original function. These photographs are part of a group of works that depicts a disorganized urban life, showing a sadly comic aspect, also presented in two of Milena’s videos: in the first one, shot from a car, horses are taking control of the roads, and in the second one, a car struggles, its wheel blocked in a hole in the road. Can we move forward here?

Milena presents a video entitled Love Story in the National Park: A love story between a bottle and a plastic bag. This love story is born in the magnificent landscapes of the Zeta river and ends in the Shkodra Lake, which shares borders with both Albania and Montenegro. In this piece, as the Zeta river and the Morača river gathers and flows together in a graceful blend of colors and movements, and as we can follow the floating journey of the two waste-protagonists, the poetry of this budding love turns into the sad finding of pollution in those magnificent natural sites.

Energies seems to circulate around the Shkodra Lake, with the streams, with the people, and if the two plastic lovers of Milena’s video progressively came down the river Zeta in order to flow into the Shkodra Lake, the artist herself drove down to Albania, around this same Lake, in order to bring those works to Tirana, in the Zeta Gallery (from the river to the gallery). With the outcome of this exhibition, let’s hope that those artworks bring us back to the source of our problems…

As we observe an enormous plastic bag sailing on the Shkodra Lake and blinking rubbish on a lightbox, the irony of the representation of garbage as part of the landscape in Milena’s works slowly becomes more dark and worrying. Will the waste of the consumption society, progressively replacing the local wildlife, be polluting our lake for a long time? In another corner, an enormous black dashboard, work by Željko Reljić, displays an orange gas gauge, signaling the urgent need to fill up the tank, predicting a breakdown. The humorous ambiance of the exhibition is suddenly turning sour. The visitor must now confront a very difficult piece, a giant hourglass in the upper part of which rests a large stone. This tool, supposed to be fluid, light and transparent, is becoming the desperate image of an incompatibility between contents and container, ending in a blockage that becomes more and more unbearable. We can feel something hidden in the work showing a ray of light through a shut door, the feeling of something obvious, very close, but still out of reach. Is it a threat, or is it a light? 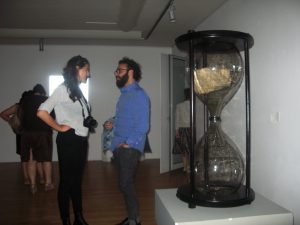 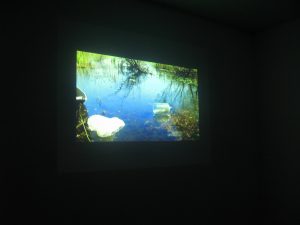 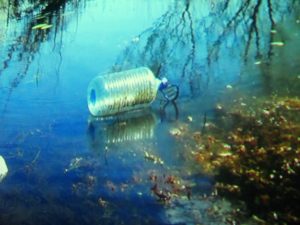 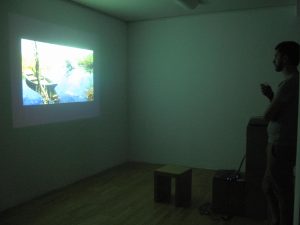 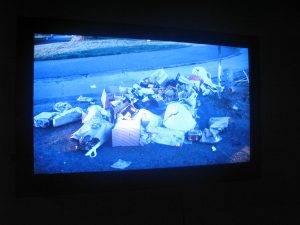 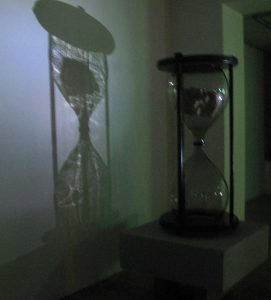