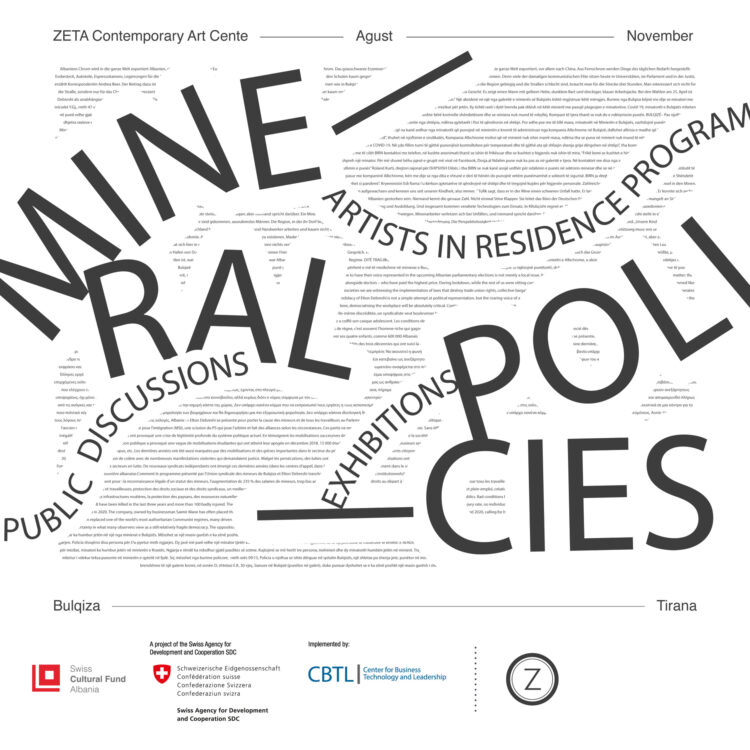 “Conditions are extreme, miners are being killed every day and the blame is put on the victims.”

(Elton Debreshi, a miner and leader of the United Miners Union of Albania)[*]

ZETA Center for Contemporary Art is pleased to announce a brand new project – MINERAL POLICY – to be held over the course of four consecutive months (August – November 2021) in Bulqiza and Tirana. Supported by Swiss Cultural Fund, a project of the Swiss Agency for Development and Cooperation (SDC), implemented by the Center for Business, Technology and Leadership (CBTL). MINERAL POLICY is conceived at several levels: as a summer residency program in the industrial region of north-eastern Albania for four selected artists, followed by two public exhibitions of newly artworks created on this occasion, a panel discussion and a publication encompassing all previous steps of the project. Blerta Hoçia, Diana Malaj, Pleurad Xhafa and Ergin Zaloshnja have been invited to spend two months in the impoverished municipality of Bulqiza in order to shed light, by means of their respective artistic media, on issues concerning the underprivileged living and working conditions of the local community that are insufficiently addressed through manipulated information channels by public authorities in charge. Known primarily for its rich natural resources of a highly valued mineral (chromium), the region of Bulqiza, situated at a distance of around 130 km from Tirana, treasures the communist legacy of a mining center of Albania. As described by Fjori Sinoruka in the June 2021 Balkan Insight report, for 30 years the state has been neglected their calls “for a special status that would recognize the unique nature of miners, providing for better working conditions, pensions and health cover.” Moreover, the financial exploitation of Bulqiza has been in the hands of private companies, such as Albchrome, one of the biggest in the country that is, conspicuously enough, very much tied to the current political regime. For these and other reasons, the miners, have not been able so far to reach enough public attention in their efforts to change the restrictive survival conditions imposed by their miserable social and economic status – something that most of the visual artists in the Western Balkans in general, and Albania in particular, are able to identify with: lacking themselves a dignified status in their own societies, some artists have recognized miners’ problems as their own and as a valuable goal to fight for – not necessarily from a professional, but rather class perspective.